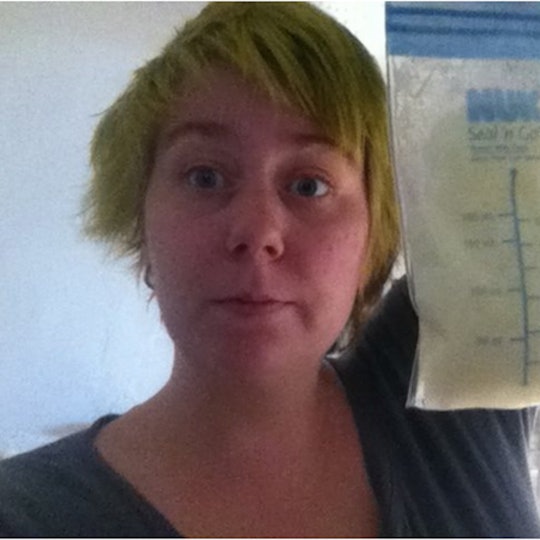 When I Couldn't Breastfeed My Son, Formula Saved Us Both

I was, and still am, a passionate breastfeeding mom. I love breastfeeding, and I’m down to do it for as long as my kind wants and needs (though, in all fairness, 8 years old would be a bit much for me). I’ve worked really hard not to judge or shame my friends who choose to — or have to — formula feed their children, despite my own strong feelings about breastfeeding. My stance has always been that formula feeding isn’t wrong or lazy or bad, it just isn’t for me. Though I can’t pretend I wasn’t a little biased against formula. Before I gave birth to my son, I was certain that I was going to be one of those moms who could smugly say that her baby had never had one drop of formula. But I’m not. My son has had formula, and when he did, I learned that it wasn’t nearly as big a deal as I was making it out to be. In fact, letting go of my fear of formula pretty much saved our breastfeeding relationship.

Only one day after my son’s birth, a rather bossy pediatrician recommended that my wife and I start supplementing his diet with formula. This was before my milk even came in, and I thought she was wrong and I told her so. I wanted to have a chance to establish my milk supply, so I stood my ground. I’m glad that I did. I’ve heard horror stories from other moms who desperately wanted to breastfeed but never had a good supply because of supplementing so early, so I wanted to do everything I could to ensure that I gave my body (and my baby) a fighting chance. And when my milk did come in, oh boy, did it ever come in! I felt like I had enough milk to feed two or three babies, and my sweet little one never wanted for a meal. Just a couple weeks into our breastfeeding journey, we were going strong, and I thought nothing could ever stop us. I started pumping occasionally in order to build up a stash (and relieve the constant pressure of full boobs!), but I didn’t think I would need it for quite awhile.

Then, when he was three weeks old, I started having the most bizarre abdominal pains. It turned out to be my gallbladder, and on my second trip to the ER, they decided it was time to take my poor inflamed gallbladder out. But the hospital was packed, and because my surgery was not an immediate life-or-death situation, it got pushed back. For days. I went in on a Monday, finally had the surgery on a Thursday, and went home on Friday. But because the pain had become constant and unbearable, they put me on morphine.

I knew that meant it was time for formula, and I cried my eyes out. My baby, who was only a month old, who had only consumed human milk, was going to have something from a can. I was petrified. What if it upset his stomach? What if he wouldn’t drink it? What if he liked it better than my milk? What if this was the end, and after this I would join the scores of mothers mixing up bottles in the kitchen for their newborns?

I was absolutely despondent. My baby needed to eat, and I couldn’t feed him. His grandparents were caring for him, and he was going through bottles like nobody’s business. I pumped constantly while we were separated, to keep up my supply, but all of that milk was contaminated and couldn’t be given to him. I sat in my hospital bed, pumped ridiculous quantities of milk, and then called the nurse because I was hooked up to an IV and couldn’t get to the sink to dump it out myself. When a new nurse would start a shift, often I would be asked “is this going to the freezer?” and I would have to explain that sadly, no, it was going down the drain. We were able to get a small amount of donated breast milk, but it still wasn’t enough for my hungry child.

I knew that meant it was time for formula, and I cried my eyes out. My baby, who was only a month old, who had only consumed human milk, was going to have something from a can. I was petrified. What if it upset his stomach? What if he wouldn’t drink it? What if he liked it better than my milk? What if this was the end, and after this I would join the scores of mothers mixing up bottles in the kitchen for their newborns? It was fine for other parents, but it wasn’t what I wanted, and I had worked so hard already to be able to breastfeed.

After that, I pumped with a new vigor and urgency. It's depressing to wake up many times in the middle of the night, not to a sweet and snuggly hungry baby, but to an alarm set on your phone and a whirring hospital pump. I pumped, I dumped, and I thought of my baby, happily slurping formula without me. In those moments, I was filled with a deep and profound sadness.

Formula, rather than this great evil that would ruin our lives like I'd previously thought, ended up being a useful and necessary bridge through a very tough time. In all honesty, it saved us both. He was fed and happy and healthy, and I had my operation, and the pains stopped

But you know what? It was fine. The formula didn’t upset his stomach much, and he didn't prefer it to breast milk. Formula, rather than this great evil that would ruin our lives like I'd previously thought, ended up being a useful and necessary bridge through a very tough time. In all honesty, it saved us both. He was fed and happy and healthy, and I had my operation, and the pains stopped. Despite my fears, when I got home he was thrilled to return to the breast, and he hadn’t forgotten a thing. There was a slight adjustment period, in which he had some gas and grosser-than-usual poops (there’s a huge difference between the poop of a formula fed newborn and a breastfed newborn, and I know which one I prefer!), but in a couple of days we were back to normal.

I had feared formula and I had worried that it would destroy the magic of our breastfeeding bond. But I shouldn’t have been so terrified, because it didn't. At the end of the day, I realized that what's most important for any baby is that their nutritional needs are met, regardless of the form that takes. The fact that my son had formula a handful of times didn’t actually take anything from me. In fact, I believe it saved our breastfeeding relationship, by ensuring my baby was fed so that I could get the care that I needed.

And after his adventure with formula, and my adventure in the hospital, we came right back together. Absence really does make the heart grow fonder. Except for that one week, he has was exclusively breastfeed until he started solid foods at six months, and he’s still a dedicated nurser at eleven months of age. I love breastfeeding and I think it is a wonderful thing, but I’m also damn glad that formula exists, because sometimes stuff happens and there is no shame in that.

More Like This
How To Breastfeed A Baby With A Cleft Lip Or Cleft Palate
The Covid Vaccine For Kids Under 5 Has Been Sent To The FDA For Review
Can The Baby Have That?
Here's Why Wearing Long Sleeves In The Summer Can Be Good For Your Baby