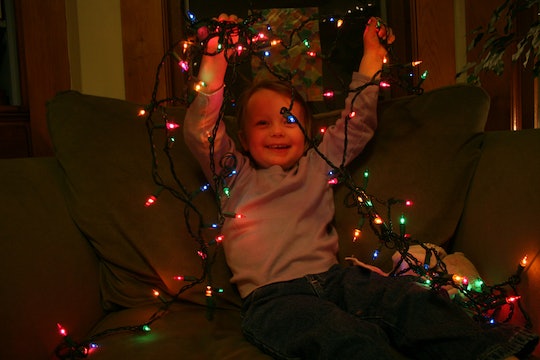 When you have a small child, everyone warns you how quickly time seems to fly by. "Enjoy it," they tell you, "it goes fast;" "Don't blink, or you'll miss it;" "Savor every minute." (Does anyone else think "my kid is not a rare steak," every time the word "savor" comes up? No? Just me?) Like many new-ish moms, I'm starting to recognize firsthand just how right everyone was when they said these things (not unlike how right they were when they said that breastfeeding is hard), even if they were annoying to hear so often. Like most obnoxious clichés, they're said so often for a reason.

In keeping with the truth of how quickly childhood flies by, my son's second Christmas, just a few days ago, snuck up on me faster than someone swinging a light saber (is that an appropriate reference? I still haven't seen The Star Wars). Despite how speedily it approached, I think we were mostly ready: The house was decorated, gifts were ~almost~ done on time, and Santa pictures were taken weeks beforehand (they turned out horribly, but they were taken nonetheless).

That said, Christmas with my kid was not all smooth sailing. There were definitely some failures, too: I totally botched a batch of treats I intended to give the neighbors, and have yet to make a replacement; I had to abandon some homemade gifts because they ended up being way more time consuming than I'd anticipated; My first attempt to get my son to fingerpaint (so I could use the prints for present projects) pretty much exploded in my face (or rather, on the carpet).

This year, like most years, our holidays have been a series of ups and downs punctuated by cozy sweaters, hot beverages, and glossy holiday album covers. Now that December 25 has come and gone, and we're sitting in the sweet, suspended last nook of the holidays before New Year's Eve, I've had a chance to process and absorb just what this means for my parenting, and I've come up with a few key lessons I hope to instill on my son as he grows.