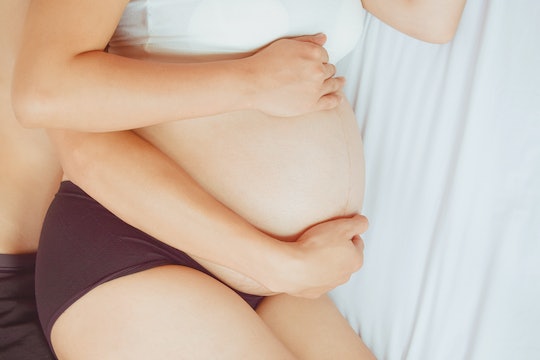 What Every Mom Thinks During Pregnancy Sex

Pregnancy, for me, was filled with discomfort, humiliation, and the cravings. Actually, there was little I felt good about (aside from giving into those cravings), including my changing body. As a woman and lover to my partner, I became acutely aware of how important sex was because there were so many times something small would keep me from wanting to. Of course it's temporary, and normal, but I came to realize the things every mom thinks during pregnancy sex, but doesn't say. Whether it's due to insecurity or actual bodily changes, pregnancy sex was more challenging than I ever thought it would be. Still fun and pleasurable, but challenging.

My first time around, I had so many hormonal fluctuations, I couldn't tell if I was ready for action or an all-out brawl in a back alley. Sex when pregnant was tricky, because I'd go from one extreme to another within minutes and had zero control over any of it. This was also the first time my partner and I had to experiment with what worked for us during pregnancy (positions, etc.) and what definitely didn't. By the time we finally figured it out, I had the baby. Yay!

My second full-term pregnancy was totally different on almost every level. My hormones stayed pretty level except I had an influx of testosterone (I was pregnant with a boy). This meant I had the sex drive of a teenager in puberty and, well, it was great. What worked in the first pregnancy, though, didn't with this one. Things that stayed the same — especially all the weird body stuff — I still thought about, often, but wouldn't dare say out loud. Pregnancy is just so beautiful and gross and bodily things happen at literally the worst times (like when you're having sex). With that, here are some of those things I only hoped my partner didn't notice at the time. They would've totally ruined the mood, in my opinion.