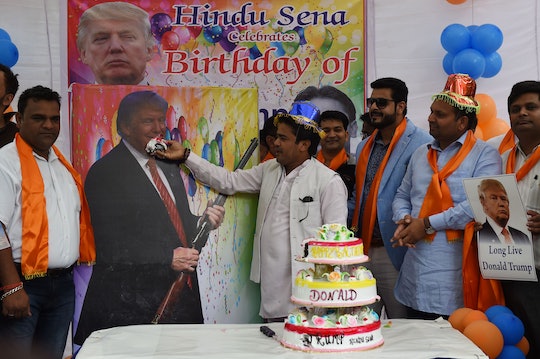 9 Things I Would Get Donald Trump For His Birthday

Tuesday, June 14 is a very important day. It's a huge, beautiful, and classy day. That's right, it's the 70th birthday of Donald J. Trump, former mail-order steak salesman and current presumptive Republican presidential nominee. The trouble is, although nobody can agree on exactly how much he's worth, we can all agree that he's pretty damn rich. So what do you get for the man who, even if he actually doesn't have everything, could at least afford everything? I can think of a few things I'd get Trump for his birthday.

Just because a person can buy something for himself doesn't necessarily mean that he will. The secret to being a great gift giver is to look for things that the receiver doesn't even realize they want. Something they don't know they need, something they've never heard of before, or even something that they might not feel that they deserve. It's like when your Grandma would slip you $20 and insist that you spend it on "something fun." Trump spends his money on real estate and trucker hats. That's no fun! And he certainly has more than enough of both. He doesn't even realize what he's missing out on, but I do.