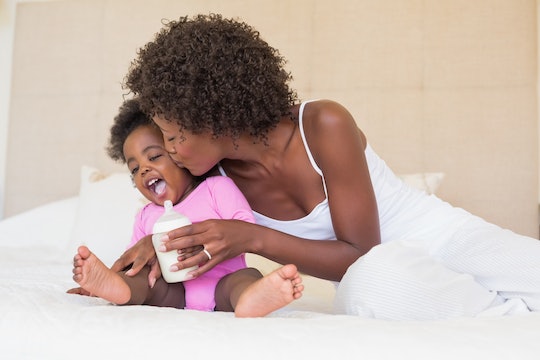 9 Things No One Tells You About Formula Feeding, But I Will

Deciding whether to breastfeed or formula feed your child is an extremely personal choice for every mom. There are numerous reasons why a woman might choose to formula feed, including not being physically capable of breastfeeding (which really isn't a choice at all) so we should never question her decision or make her feel less than because of it. Because breastfeeding is constantly being promoted (and for very good reason) there are so many things no one tells you about formula feeding. Things that, honestly, every mother, regardless of whether or not she ends up using formula or breastfeeding for an extended period of time, should know.

I breast fed my first son (for a short period of time), and formula fed my second son, so I know what it is like to experience both breastfeeding and formula feeding. When my second was born, I wasn't able to breastfeed him for various reasons. I felt so guilty, like he had been short changed some how. I mean, I knew that formula was a perfectly suitable alternative to breastfeeding, but the list of BS things I told myself about formula feeding was a long one and, well, that list left me feeing anything other than confident and happy in my decision. I, like so many, wanted to be the "perfect mom," and though formula feeding doesn't make anyone a bad mom, I still felt a fair amount of "mom guilt" every time I'd give my newborn a bottle.

Now my babies aren't really babies anymore and, looking back, I shake my head at my former self for ever wasting any time feeling guilty about formula feeding my boys. I should have never allowed myself to be burdened with the societal guilt of not giving my children what others say is "best." No one should have to apologize for formula feeding; Not me, not you, not anyone, because it is a great option for families and it's a personal choice for everyone. So, for the sake of the things I wish I had known when I fed my boys formula (because, yes, it would have saved me a lot of guilt), here are nine things that no one will tell you about formula feeding.

More Like This
I’m A Newly Single Mom. How Do I Get Over My Body Insecurity?
Gathre’s Winnie The Pooh Collection Is Finally Here
23 Sweet Quotes To Dedicate To Your Rainbow Baby
"Crybaby Ambulance" In Europe Will Help Exhausted Parents