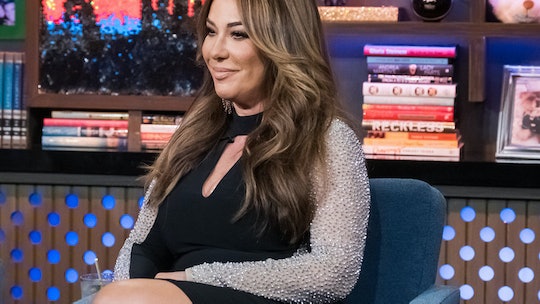 Twitter Is Divided Over Barbara On 'RHONY' & I Don't Blame Them

Barbara Kavovit hasn't exactly had the smoothest debut on Real Housewives of New York City. While fans are starting to understand the Evergreen Construction CEO, tweets about Barbara on RHONY prove that there's more work to be done if she wants to warm her way into the hearts of every Housewife — and fan. Since her introduction to the Bravo reality series, Barbara has hit a few rough patches. And now, it definitely doesn't look like Barbara and co-star Ramona Singer will be friends anytime soon.

At a dinner party hosted by Bethenny Frankel earlier this season, Barbara was asked if she liked Ramona. Barbara admitted that she didn't and — of course — the news traveled back to Ramona. Since the incident, Ramona has taken a few swings at Barbara, from passive aggressive comments to some not-so-subtle shade at Barbara's love for wrap dresses. Yikes.

Nonetheless, in the Apr. 24 episode titled "Birds, Broads, and Breakups," Barbara decided to mend a few of her relationships with the Housewives. She had a heartfelt conversation with Dorinda Medley and the duo chose to mend the tension between them and start fresh. However, Barbara wasn't quite as successful when she reached out to Ramona.

After fielding a few more digs at the wrap dresses, Barbara managed to reign in the conversation. And honestly, it was like watching a work of art being created in front of my eyes. Barbara asked Ramona to take her shopping to show her what she liked to wear. The Evergreen Construction CEO then swiftly apologized for what she said at Bethenny's party. In the end, Ramona accepted the apology, but she also refused to hug Barbara. So jury is still out on where this relationship stands now.

It's hard breaking into an already-established cast, especially when your reality television debut involves fights with other RHONY stars. Despite Barbara's attempts to repair her relationships with both Dorinda and Ramona, some fans just weren't buying the apologies and want Barbara gone before next season.

Meanwhile, other fans are rallying behind Barbara and applauding her for stepping up to Ramona. A few fans have also questioned why Ramona decided to come for Barbara — and her wrap dresses — in the first place.

Regardless of Barbara's feud with Ramona, Barbara isn't exactly phased by all the drama. She has plenty of projects going on other than RHONY. In an interview with Watch What Happens Live with Andy Cohen, Barbara revealed how she felt about the situation.

"[Ramona] wouldn't hug me, but you know what? It doesn't matter what Ramona does," Barbara said. "I run a multi-million dollar construction company in New York City — the toughest city in the world — and I was ready to bring my bulldozer there. I just feel like Ramona says a lot but she doesn't contribute a anything."

Although Barbara's feud with Ramona is seemingly over, fans will never forget. So whose side are you on? Personally, I'm all for Team Let's Get Along. But where's the fun in that?