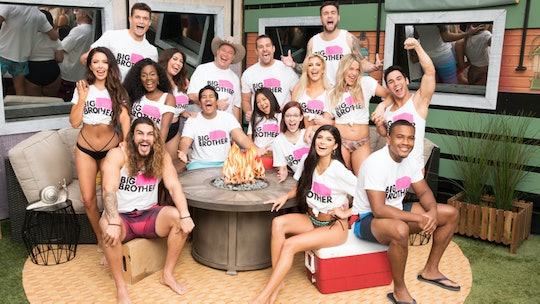 Yikes! These 9 Tweets About 'Big Brother' 21 Are Almost Too Real

Big Brother is back for Season 21, and no, you're not hallucinating. The new contestants really do look and feel like previous personalities from Big Brother past, and CBS has only aired one episode. The season premiere unraveled like any other. Host Julie Chen introduced the 16 Houseguests to their summer camp home, alliances started to form, and early frontrunners were chosen. But the devil is in the details, and tweets about Big Brother 21 proved that fans are ready for something different this year.

In the Big Brother 21 premiere, Julie announced that the Houseguests would elect a Camp Director, a person with "unprecedented powers," including a safety net for the first week and influence on the first Head of Household. The rules are simple — each contestant gets one vote and they can't vote for themselves. But since this is Big Brother and every gifts comes at a price, no one wants to volunteer at first. However, Cliff Hogg III— who clearly sees the writing on the wall — stands up. Shortly after, David Alexander, Jessica Milagros, and Jackson Michie volunteered themselves for the job.

Eventually, David backed out and the position came down to Jackson and Jessica. Jackson used his charms to win over his fellow Housemates. Meanwhile, Jessica, who appeared to have it in the bag, formed an alliance with the girls. So basically, fans knew what was coming next.

Sadly, Big Brother fans can't have nice things like an all-female alliance. Every time one appears to emerge from the depths of the BB shadows, it's almost immediately shut down.

In the premiere, Jessica rallied the women in the house on the basis of girl power. However, the bond fizzled out quickly, as Nichole Anthony and Isabella Wang decided to vote for Jackson instead. But the broken alliance was not lost on Twitter.

It goes without saying that Jackson was elected Camp Director with a solid 10 votes. Although Jessica was astonished that people in the house lied about voting for her, that is just the name of the game. But, fans were not surprised by the outcome of the election, especially when you've seen previous seasons of Big Brother.

The truth is, Big Brother fans have seen this sort of thing time an time again. When one fan expressed their "irrational hate for Jackson" during the BB season premiere, another fan offered an explanation.

"I think it’s because he’s literally been on every season so far," the fan wrote. "I can’t take another pretty boy running the show week after week."

So basically, fans are tired of the same tropes on Big Brother. At this point, they're boring and predictable. And while fans keep returning every season to see if the show will change, CBS has proved that they're going to keep up the same old formula.

That being said, Season 21 of Big Brother just started. And with a number of weeks ahead of us, there are still plenty of moments left for change — or is that just wishful thinking?