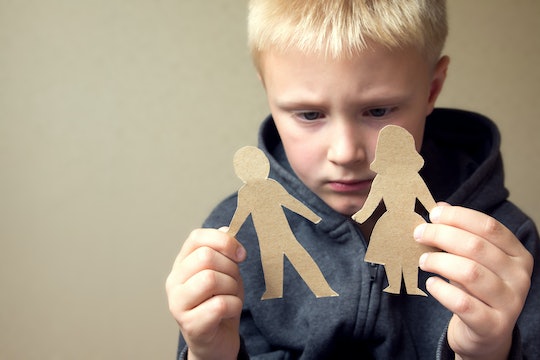 9 Ways Your Kid Can Tell You're Having Marriage Problems

When you're a parent, you'll do anything to give your kids a happy, healthy, successful life. You'll move mountains if it means giving them everything you've dreamed of, but unfortunately, it's not always that easy. Many people assume that staying married, even in an unhappy marriage, gives their kids the best shot at life, but with all the ways your kid can tell you're having marriage problems, it could do more harm than good.

My daughter was only 2 months old when I called it quits with my ex-husband. I panicked about how a divorce would affect her, like having separate holidays and spending time in two different homes, but I was more worried about keeping her involved in an unhappy marriage. As a newborn, her soft peach fuzz of hair had already soaked up enough of my tears, and trying to breastfeed her while arguing with my ex made no sense. The damage we were causing by trying to force a failing marriage into success so that she didn't have to have two Christmases was absurd.

More than anything, I wanted her to have a home where she felt safe, loved, and happy. I wanted her to see me, her mother, in a relationship that was fulfilling, healthy, and loving so she knew what to expect out of a future partner. I truly believe that divorcing her father was one of the best things I could've ever done for me, but for her, too. If we had stayed together, these nine things would've given it away that we were having serious marriage problems and no kid needs to grow up that quickly.