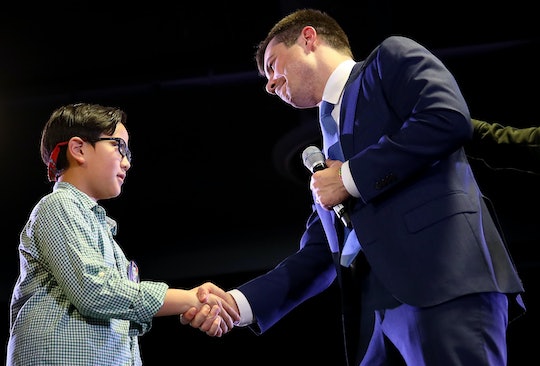 More often than not, presidential candidates are asked to weigh in on national issues, legislation, and policy proposals while campaigning for the White House. But every once in a while they're presented with more personal questions like the one asked of the former South Bend, Indiana, mayor on Saturday. A 9-year-old boy asked Pete Buttigieg for help coming out as gay at a campaign rally for the Democratic presidential hopeful in Denver, Colorado.

"Thank you for being so brave," Zachary Ro said in a submitted question that was later read out loud by Colorado Secretary of State Jena Griswold, The Colorado Sun reported. "Would you help me tell the world I'm gay, too? I want to be brave like you."

Buttigieg responded by first asking the young boy to "give a wave" if he wanted to. Ro then joined Buttigieg on stage, where he gave the Democratic hopeful a bracelet he'd made.

"I don't think you need a lot of advice for me on bravery," Buttigieg told Ro. "You seem pretty strong. It took me a long time to figure out how to tell even my best friend that I was gay, let alone to go out there and tell the world." Buttigieg went on to say that it was "really something" to see Ro be "willing to come to terms with who you are in a room full of thousands of people you’ve never met."

While Buttigieg didn't feel Ro needed his help to be brave, he did offer the young boy some advice. "It won't always be easy, but that's OK, because you know who you are," Buttigieg said. "And that's really important, because when you know who you are, you have a center of gravity that can hold you together when all kinds of chaos is happening around you."

The Democratic candidate then told Ro he'd likely never know "who's taking their lead from you, who's watching you and deciding they can be a little braver because you have been brave."

"When I was trying to figure out who I was, I was afraid that who I was might mean that I could never make a difference," Buttigieg said. "What wound up happening instead is that it's a huge part of the difference I get to make. I never could have seen that coming, and you'll never know whose life you might be affecting right now, just by standing here right now. There's a lot of power in that."

Earlier this month, conservative, right-wing radio host Rush Limbaugh publicly questioned how parents would explain Buttigieg kissing his husband to their children, implying that the candidate's sexual orientation was a "problem." Buttigieg later told CNN, that he was "not going take lectures on family values from the likes of Rush Limbaugh."

As Buttigieg's campaign festivities wound down on Saturday in Denver, Ro told KDVR that he felt "inspired" by the fact that Buttigieg was running for president as an openly gay man. "Someday, I want to be like him," the boy said.