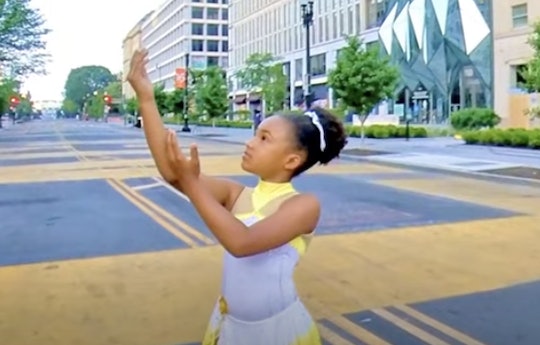 An improvised performance by a 9-year-old figure skater has gone viral as a beautiful, positive image of hope. Earlier this month, a young girl named Kaitlyn Saunders, aka the Skate Kid, went down to the Black Lives Matter Plaza in Washington, D.C. to express her emotions and commemorate this significant moment in history with a truly moving dance on roller skates.

On the morning of June 8, just after sunrise, Kaitlyn and her parents went to the newly named Black Lives Matter Plaza in downtown Washington, D.C., a two-block-long section of 16th Street that Mayor Muriel Bowser had commissioned artists to paint "Black Lives Matter" on leading to the White House. People from all over the country have taken to the area in the nation's capital to protest systemic racism and police brutality in the wake of the police killing of George Floyd.

"She said her hope is that we can all speak up and protect each other. I wanted to share my hope for the future," Kaitlyn wrote on her Instagram page, @The.Skate.Kid, referring to Bowser. "At 5:30am while the streets were still empty, my parents and I went down to Black Lives Matter Plaza to record this video."

After her video went viral, Kaitlyn told CNN in a recent interview that she hopes "to replace the negative messages that people have in their minds with positive ones." She added, "I feel free and powerful when I'm on the ice. Like I can fly and no one can stop me. I wish everyone could feel like that."

Watch her stunning performance below:

Kaitlyn told NBC News Washington that she made up her own routine on the spot that morning with her mom Katrice Saunders looking on. And, of course, her mother couldn't be more thrilled to see her daughter's routine positively affect people. "I'm so proud she was able to express herself in this way. It's wonderful to see all the hearts touched and support on social media," she told NBC News Washington.

Kaitlyn's video has been viewed more than 125,000 times on YouTube and 350,00 times on her Instagram. The talented 9-year-old has been trained by coach Joel Savary of Diversify Ice, which he created to help promote and encourage underrepresented figure skaters.

This isn't the first time Kaitlyn has used skating as a way to express her feelings. Earlier this year, before the ice rinks closed down due to the pandemic, she shared a skating routine she performed on the ice to Beyoncé’s song “Freedom" and before that she performed to Aretha Franklin's "R-E-S-P-E-C-T."

At just 9 years old, Kaitlyn Saunders is already proving to be a positive and incredibly talented force in the world.