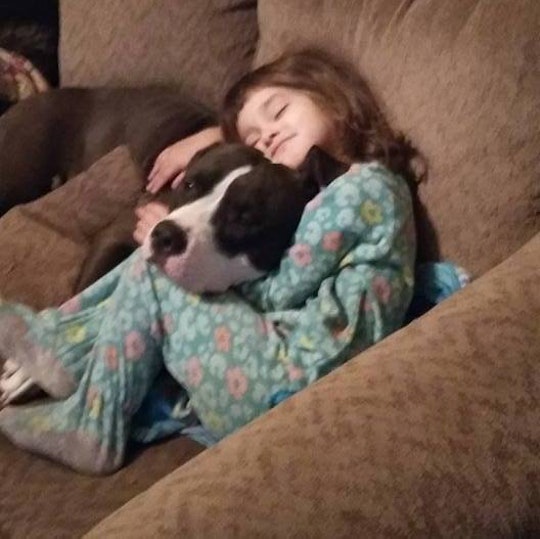 She loved playing with her puppy, doing her makeup, and handing her dad tools while he worked on his car. Now, Yanelly "Nelly" Zoller has become one of the latest victims of an at-home accidental gun death, as the 4-year-old reportedly shot herself after discovering a gun in her grandmother's purse last week. It's a devastating, crippling, and absolutely senseless tragedy for Nelly's family and her community. It's also another exhibit in a horrifying backlog of cases highlighting the danger of adults opting to keep unsecured firearms in their homes, within the reach of innocent children.

According to the Tampa Bay Times, Nelly was on the hunt for candy when she reached into her grandmother's purse in her grandparents' Tampa home Sept. 14. But instead of candy, the little girl, who looked forward to watching the cartoon Shimmer and Shine, ultimately ended up with a heartbreaking obituary. She had accidentally pulled the gun's trigger and sustained to her chest the injury that would end her life.

Nelly's father, 22-year-old Shane Zoller, told the Tampa Bay Times that his parents, Michael and Christie Zoller, were involved in Nelly's upbringing after she was born while he was still in high school. The little girl, he said, was "attached to her nana's hip."

It certainly doesn't seem as though Nelly was at all wanting for love or affection. Still, it was a close, trusted relative's gun that killed her. Christie Zoller has not yet responded to Romper's request for comment.

That's as unacceptable as it is preventable. And the fact is that Nelly's death — as endlessly horrible as it was — was by no means an aberration. In fact, it was just a blip among the stories of the scores of children in the United States who are killed or injured as the result of gunshot wounds, oftentimes accidental, just the way Nelly was.

A recent study based on data from 2012 to 2014 revealed that gun-related injuries landed an annual average of 5,790 children in emergency rooms during that timeframe, CNN reported. More than one-fifth of those kids had been shot accidentally. The same study found that an average of about 1,300 kids died of their gun-related injuries between 2012 and 2014. The bulk of these deaths were determined to be homicides or suicides, but a not-insignificant 6 percent of them were, again, unintentional.

For Dr. Eliot W. Nelson, of the University of Vermont Children's Hospital who wrote an op-ed to accompany the study in the journal Pediatrics, this led to one logical conclusion: "[T]he safest home is one without firearms."

Still, Nelson concluded that it was necessary to engage "parents who keep guns for hunting or self-protection, and who are part of a wide spread and deeply rooted social gun culture in our country." So, he called for safe gun storage in homes, such as gun safes and lock boxes. These aren't conversations Americans like to have, but they are ones we have to have or children are going to keep accidentally hurting themselves or others.

Many cases where toddlers shoot themselves or others are the result of unsafe gun storage. That was true in Nelly's case, and in Bryson Mees-Hernandez's. Four-year-old Hernandez died in January 2016 after finding the .22-caliber Derringer his grandmother stored underneath her bed. And a similar accident happened again in February, when an 8-year-old got ahold of a gun he used to accidentally kill his 5-year-old sister and his 4-year-old neighbor in the Jacksonville, Florida, apartment where he lived.

The list goes on and on and on and on. In fact, an Associated Press/USA Today collaboration found in 2016 that government stats on accidental gun deaths among kids did not include all instances.

Currently, there are few laws or regulations that require safe gun storage or penalties for those who don't store weapons safely. In 2015, Slate's Dahlia Lithwick reported that only some states have "child access prevention" (CAP) laws on the books to hold someone legally responsible when a death such a Nelly's occurs. But even where the laws do exist, they're typically vague and largely unenforced. Why? Prosecutors don't want to pursue charges against grieving parents and caretakers.

And that makes sense, because this conversation isn't easy. The grieving loved ones of these children meant no harm. But when deaths like Nelly's become a common occurrence as they have, it's clear we have to do something. No, that something won't be taking anyone's weapons; rather, it should be a requirement that gun owners store their weapons safely, or face penalties. Something has to change.