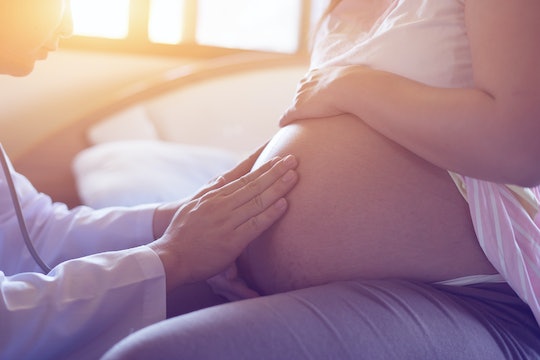 The oldest woman to ever give birth was was 66 years old when she delivered her twins — but someone else may beat her record very soon. A 67-year-old Chinese woman is currently pregnant with twins, an she's causing a bit of controversy. Despite her deep desire to have children, doctors at her local hospital are urging her to get an abortion, due to health risks both she and her fetuses face.

The expectant woman, who is using the pseudonym Zhang Heng, became pregnant via in vitro fertilization (IVF) in June, Newsweek reported via Beijing News' original Chinese report. Zhang's passion for having a baby stems from a tragedy she and her husband experienced back in 2014 — their only son died in a car accident at age 34.

“I couldn’t fall asleep without sleeping pills for years. I used to dream about educating my son’s children, but it came to nothing,” Zhang told Beijing News, speaking of her son's death, the South China Morning Post reported.

So, Zhang decided to go the IVF route, because she and her husband were not able to conceive naturally, and because adoption agencies declined working with the couple due to their ages, Newsweek noted. She had to travel to Taiwan to get IVF, and the procedure was a success. Now, two months later, she is back in China, and having trouble finding a doctor who will help her carry her twins to term.

Zheng saw several doctors at Beijing’s Peking University Third Hospital, where she was diagnosed with hypertension, Newsweek reported by way of Beijing News. Hypertension, also known as high blood pressure, presents several risks during pregnancy. According to the Mayo Clinic, hypertension during pregnancy can cause decreased blood flow to the placenta (aka how babies get nutrients and oxygen), placental abruption (which can cause heavy bleeding), major organ injury, a premature birth, growth restriction for the fetus, and future heart disease.

Many pregnant women with high blood pressure successfully deliver healthy babies. For example, Beyoncé recently opened up to Vogue about her pregnancy with twins Rumi and Sir. In the interview, she disclosed that she had to stay on bed rest for the month leading up to the birth, and that she had to get an emergency C-section. That was all due to her having preeclampsia, aka toxemia, which is when a pregnant woman has high blood pressure and swollen limbs, which doctors typically treat with bedrest and eventually inducing labor, according to WebMD.

However, doctors determined Zhang's pregnancy to be so high risk that one even advised her to get an abortion. She told Beijing News that the physician's suggestion made her "feel like I was a wanted criminal," the South China Morning Post reported. She added:

No one cared about me when I lost my only child, so I found a way out by myself, but you’re blocking me again. I’m not so rich, but I’m prepared to support a child, and I believe I could live to 85 to see my child grow up to be an adult. [Even if I couldn’t,] my nephew, who’s about 40 years old, can help raise the child. Having a child is everything to me.

On Dec. 29, 2006, Maria del Carmen Bousada de Lara made history as the oldest person on record to give birth, BBC News reported. Bousada de Lara was able to get IVF from a California clinic by lying about her age — she said she was 55, when she was really 66. She passed away a few years later at the age of 69 due to ovarian cancer, which she developed six months after giving birth to her twin boys, the Independent reported.