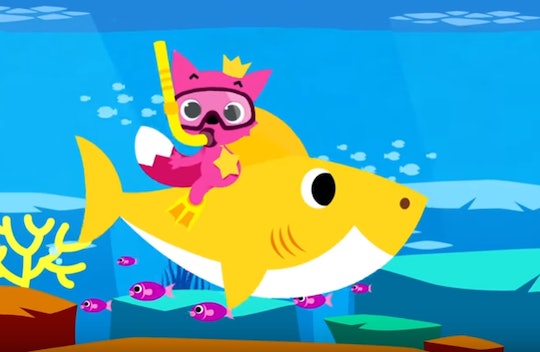 Brace Yourselves: 'Baby Shark' Is Reportedly Set To Become A TV Show On Netflix

Sometimes you just have to accept the things you cannot change. This is what I've heard, anyhow. And here's one thing it doesn't look like anyone is going to be able to change any time soon — the "Baby Shark" craze. Kids love it, guys, and who are we to begrudge our children a little joy in this life? And they're about to get even more joyful, because a Baby Shark television show is reportedly coming to Netflix, so obviously that's all any of us will be watching for the foreseeable future.

More Like This
12 Kid Guests Who Appeared On Ellen & Stole Our Hearts
Sorry Citizen Kane, Paddington 2 Is Now The Top-Rated Film On Rotten Tomatoes
The Great-Granddaughter Of Alice In Wonderland Is Getting Her Own Show
Peppa Pig Is Going Camping In A New Live Show & You’re Invited!

I don't even know if using the word "popular" to describe the "Baby Shark" song and dance video from South Korean education song makers Pinkfong does it justice. It has been viewed well over 2.2 billion times, everyone knows it by heart. Billboard reported that even new mom Cardi B is all about the Baby Shark these days, just in case you needed proof that it had seeped into every corner of our cultural framework.

Now it looks like Pinkfong is planning on expanding the already massive Baby Shark universe by "releasing short videos via Netflix Inc., a cartoon series and a musical in North America this year," one of the company’s founders recently told Bloomberg. Netflix has not yet made an official statement.

Let's take a minute to really consider how brilliant this is on the part of Pinkfong. Short videos on Netflix for the strangely short, yet intense, attention spans of toddlers. On Netflix, where it's pretty easy to stream. And just in case you have older children who might want a little piece of that sweet Pinkfong pie but they're not that interested in Baby Shark, Bloomberg reported that the company is developing a new program about penguins specifically for kids aged 5 to 8. In other words, they're taking over the world and making it bright and colorful and setting it to an unbelievably catchy tune.

I suppose there are worse things. I'm having a hard time coming up with worse things, but surely there must be.

As Pinkfong reportedly moves forward with its plans for new Baby Shark videos on Netflix, a North American musical, and a show about penguins, fans can expect them to keep that same catchy K-pop element that made the song such a hit. But Baby Shark isn't just about style; there's a message behind all of that doo-doo-doo-doo-doo-dooing, as chief financial officer Seungkyu Lee explained to Bloomberg: "If you’ve ever heard of ‘Baby Shark,’ you might feel the importance of community. In a group, we should walk or swim together."

For the record... yes, we've all heard of Baby Shark, no question.

I sort of thought we had hit maximum Baby Shark capacity but it seems that well might never run dry. Such is the way of small children, I suppose. When they love something they really love it.

Although one has to wonder how majestic sharks are feeling about this song? I can't imagine they're flattered by it.

Editor's Note: A previous version of this article stated the "Baby Shark" series on Netflix was confirmed. It has been updated to accurately reflect the show's status.