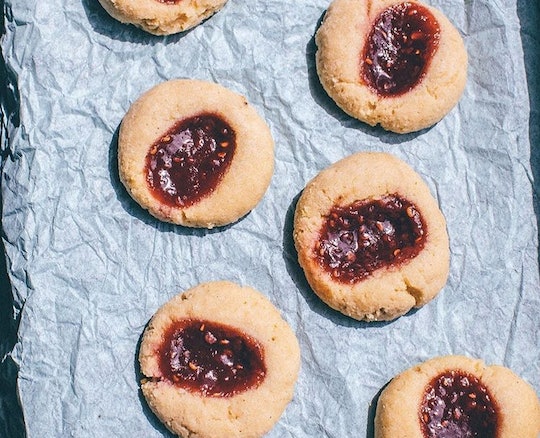 Proving that Instagram knows me better than I know myself, ads for the Friends LEGO set and home-delivered brownies have been popping up on my screen just a few days before that time of the month. That might not mean anything to you, but during my period I crave reruns of Friends and anything covered in chocolate. As it turns out, those brownies that kept popping up on my feed were from a bakery that makes treats to help your period.

Yep, you heard right. The Moon Cycle Bakery website claims that the business is “a space to shed the stigma + talk about periods as naturally as they occur in our bodies," as well as "satisfy our cravings and nourish our bodies.” The bakery claims to use ingredients that help replenish nutrients women lose during menstruation and relieve the glorious mixing bowl of crappy symptoms we typically deal with while on our periods — bloating, headaches, cramps, and irritability. Choc-chipped relief sounds great.

But how does it taste, exactly?

While I waited for my order, I reached out to a nutritionist to find out if certain foods could actually help with some PMS symptoms. Jennifer Hunt is a registered dietitian nutritionist. During our call we started with sweet potatoes.

“Carbohydrates can help increase serotonin levels," says Hunt. "Choosing complex carbohydrates, like sweet potatoes, instead of refined carbs and sugar, will help women manage blood glucose and avoid insulin spikes that can lead to more fatigue, irritability and cravings." So: tick. Hunt also points out that potatoes' natural sweetness makes them ideal for the cravings that sometimes come prior to menstruation, without loading you up with sugar.

I was excited to see if I could actually eat my way through the not-so-fun parts of my period.

She also confirms that chocolate could be helpful during our periods as well. But not a typical chocolate bar — something high in cacao. Cocoa powder can provide 10% of your daily magnesium intake per day, which some studies suggest can help with headaches and mood during menstruation, Hunt says.

Hunt also sees evidence that fruits like raspberries can help relieve some symptoms. With 8 grams of fiber per cup, raspberries “may aid in constipation sometimes associated with PMS," she says, given their anti-inflammatory effect. (Hunt did stress during our conversation that the amount of these ingredients mattered and that small amounts may not give the results I hoped for.)

After our conversation, I was excited to see if I could actually eat my way through the not-so-fun parts of my period. And shortly after, my order arrived and I was ready to get started.

I waited until the first day of my period and decided to start with the sweet potato brownie, because between my first and second day of my period I always get a really bad headache. The sweet potato brownies are made with cocoa powder and dark chocolate, both of which contain magnesium. They also contain sweet potatoes, which can supposedly help with irritability. I love brownies and I was really excited to try this. Although it was probably the most moist brownie I have ever had, it definitely wasn't as sweet as a traditional brownie. If you're used to dark chocolate and desserts more on the savory side, you'd enjoy this. It took a few bites for me to really get into it, but once I did, I liked it. By the end of the day I didn't have a headache, which is really rare. I didn't notice much of a change in my mood.

Normally during my period I'm exhausted.

On day two I decided to play it safe and go with another treat that contained cocoa powder, just in case a headache was still possible. So I went with the chocolate cup sweetened with ginger and honey. This chocolate cup was really rich and creamy. I couldn't tell there was any ginger in it, which I kind of liked. I'm not a big fan of ginger in baked goods, sorry Britain. I really enjoyed this one and was only disappointed that it lasted just two bites. I licked my fingers and hoped for another headache-free day. By the end of the day, I'm happy and really surprised to report that for the first time in years, I did not have a headache during my period. Overall, I was in a better mood, mostly because I wasn't suffering from a headache.

On day three, I figured I was out of the woods and probably wouldn't need to have another treat to chase away my headaches, so I switched it up: I had the raspberry cookie. This is seasonal and by the time I received my order it was no longer available. Just my luck, out of all of the treats so far, I absolutely loved this one. It was soft, chewy and had the perfect hint of sweetness. By day three, I noticed not only that I didn't have a headache, but overall I felt more energized (thank you, moon!). Normally during my period I'm exhausted.

The whole experience, especially after talking to a dietician, made me realize that certain foods could actually improve my periods.

On day four I ate the golden-mylk ginger cookie, which is supposed to be great for treating upset stomachs and reducing inflammation. Out of all of the treats, this was my least favorite (SORRY). Nothing was necessarily wrong with it but I'm just not a big fan of turmeric and ginger in baked goods, must I say it again. It tasted like spices and milk, which just didn't hit the spot for me. But overall by day four, my period symptoms were pretty mild compared to past periods. I didn't have any cramping and still there was no sign of a headache on the way.

On my last day, I ate the chocolate cup with gluten-free pretzels. It tasted just like the first chocolate cup I ate earlier in the week — satisfying! I have to admit, I was sad this was my last treat. But by the end of the week, most of my symptoms seemed be have kept at bay.

The Results Of Period-Specific Baked-Good Consumption

The whole experience, especially after talking to a dietician, made me realize that certain foods could actually improve my periods and help with symptoms.

Does that mean I need to order specific baked goods from a bakery that caters to women during their periods? Probably not. After all, Hunt listed a ton of foods that were healthy and could help with symptoms during menstruation during our conversation.

However, I do crave sweets during my period and rarely feel better after I give in. But after gobbling up the treats from Moon Cycle Bakery, I honestly felt better. The only problem was trying to figure out delivery so that I could get the order in time, and the fact that the treats can be a bit pricey. But for me, the pros outweigh the cons. Getting to eat delicious baked goods that helped make my period more bearable is win for me.