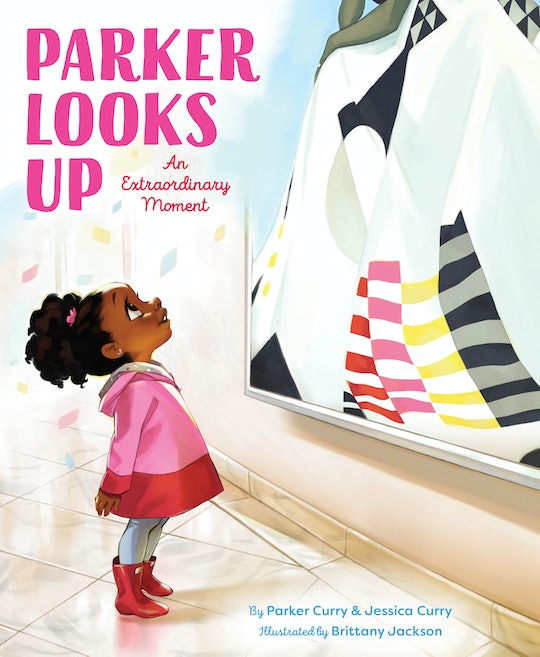 It's always pretty fascinating to see who our children choose as heroes. For instance, my youngest son spent a very long year obsessed with Sonic the Hedgehog, quizzing everyone in our family on Sonic trivia until some of us (mostly me) thought we might lose our minds. He had real-life heroes as well, of course, but perhaps none as inspiring as Parker Curry's personal hero. The little girl became fascinated with Michelle Obama in 2018, and her love for the former first lady went viral. Now she and her mother have written a book called Parker Looks Up, turning her Michelle Obama moment into something that could inspire other kids.

Parker Curry was just three years old when she visited the National Gallery in Washington, D.C. with her mom, Jessica Curry, in March 2018. While there might be some kids who get pretty bored at the Smithsonian National Portrait Gallery, little Parker Curry was not one of them. When she came upon Michelle Obama's official portrait, she stood in absolute awe looking up at the former first lady. The moment was captured by Ben Hines from North Carolina and shared on Facebook, as per Buzzfeed News. After the photo went viral, the news outlet managed to find Parker and her mom Jessica to ask them about Parker's fascination with Obama, and Jessica explained, "In the world we live in today, I’m just trying to raise a little girl who has opportunities to see women who look like her doing great things."

Now it seems they're hoping to inspire other kids to look up and see women who are doing great things as well. Jessica and Parker Curry have released a book called Parker Looks Up, which Amazon describes as a story which "follows Parker, along with her baby sister and her mother, and her best friend Gia and Gia’s mother, as they walk the halls of a museum, seeing paintings of everyone and everything from George Washington Carver to Frida Kahlo, exotic flowers to graceful ballerinas. Then, Parker walks by Sherald’s portrait of Michelle Obama… and almost passes it. But she stops... and looks up!"

Parker Curry has clearly never stopped looking to Becoming author Michelle Obama as an inspiration. She went on from her first awestruck moment in front Obama's official portrait to dressing as the first lady for Halloween and even attending a private dance party with her hero, as per CNN.

Now Parker is busy getting interviewed on NBC Nightly News by Lester Holt and getting that autograph down pat.

It has been an inspiring journey for the little girl, and it's one her mother explained to Essence in an April interview that she hopes other children can glean a lot of hope from as well:

Parker’s every day moment became an extraordinary one, and my sincerest hope is that our book will continue to resonate that moment’s power and promise, its hope and dreams, its inspiration and indelible impact with Parker, her generation, and generations to follow.

Clearly Parker was inspired beyond just one single moment looking up at Michelle Obama's portrait. She saw something that was personal to her; a hero she can emulate. A woman she can aspire to be like one day.

The kind of person who sets an amazing example for all little girls. How wonderful for Parker that she truly looked up.