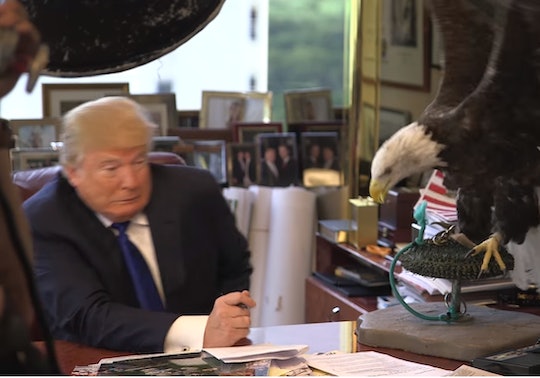 A Bald Eagle Attacked Donald Trump, & It Probably Had These 6 Thoughts When It Happened

America, TIME magazine has just given us the most glorious holiday gift one could ever hope for: a video of a bald eagle attacking Republican presidential candidate Donald Trump. Fresh off of the announcement that German chancellor Angela Merkel was named TIME’s Person of the Year, the magazine released behind-the-scenes footage of a photo shoot taken this past August. Male bird model Uncle Sam graciously agreed to appear on TIME’s cover with Trump, but it seems the two didn’t get along. You can tell there’s bad blood right away, as Uncle Sam refuses to make eye contact with Trump. But the real shocker comes when Sam physically attacks Trump, not once, but twice.

Listen, I’m no advocate for violence, but certain concessions must be made when you’re dealing with a bird of prey. Uncle Sam has no problem eating a baby deer; you can’t just step to him and expect there to be no repercussions. He may have friends who hang out at the Mexican border, and he may be sick and tired of hearing about Trump’s plan for a wall. And the immigrant thing? What’s wrong with immigrants? Some of Uncle Sam’s best friends may be from Canada, and you know what? America freaking loves them. Marco Rubio may take Trump’s insults lying down, but it looks like The Donald has met his match with Uncle Sam. So what was Sam thinking during these key moments of footage? I’ll offer my (completely fabricated) explanations.