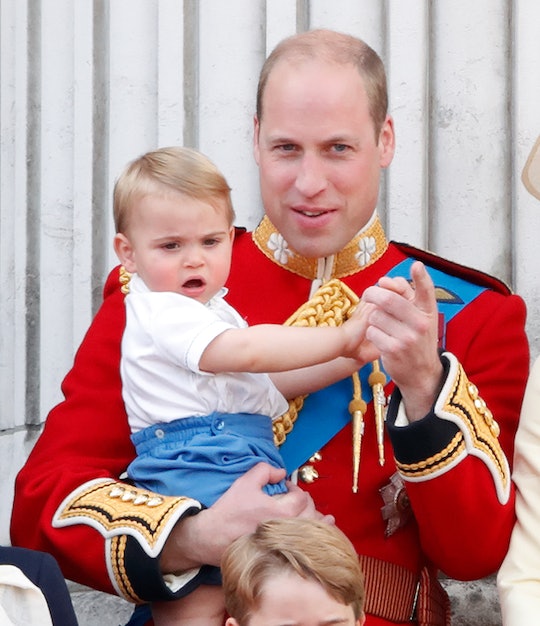 Parents of more than one kid know that if you can magically find something all of them can agree on, like a preferred bedtime story, you leap on it. This is also apparently true for royal parents, as Prince William revealed he reads his children a certain book "all the time." The book in question, Room On The Broom, is considered something of a modern classic, and it also happens to be written by a beloved author from one of their earlier favorites.

Prince William was visiting South Wales with his wife Kate Middleton on official royal duties on Tuesday when he stopped into Joe's Ice Cream Parlour. According to the Daily Express, the Duke of Cambridge — father to 6-year-old Prince George, 4-year-old Princess Charlotte, and 21-month-old Prince Louis — saw a little child reading Room On The Broom and called out, "I read this to my children all the time!"

Room On The Broom tells the fantastical story of a witch and her cat who fly "happily over forests, rivers, and mountains on their broomstick until a stormy wind blows away the witch's hat, bow and wand," according to the book's description, and meet other animals along the way who want a ride on her broom. The book has been read by millions of children in the United Kingdom, according to Radio Times, including three little royal children, apparently.

Room On The Broom was written by Julia Donaldson, a British children's author Prince William noted during his visit to South Wales he had once met when she was given a Commander of the Most Excellent Order of the British Empire (or CBE) for her services to literature in 2018, according to The Sun.

Donaldson was already a family favorite before the two met, however, because Prince William was already reading her book The Gruffalo to his children. He told the writer that he knew who she was because, per The Sun, The Gruffalo was "a big hit" in his household. This particular book of Donaldson's came out in 1999 and tells the story of a little mouse who meets a creature that is part bear and part buffalo, a Gruffalo. He apparently also credits her with saving parents at bedtimes, as he told the royal fans in South Wales on Tuesday, and there is simply no better recommendation than that.

Donaldson is certainly lucky to have such devoted fans in the royal kids, but perhaps one of these days they might read a book written by someone in their family. Their grandfather Prince Charles penned a children's book called The Old Man Of Lochnagar back in 1991, while Prince Andrew's ex-wife Sarah Ferguson, the Duchess of York, has written several to choose from as well.

Of course, as Prince William knows as a father of three, if his kids like Donaldson's books, it's wise to stick with them. How often will they all agree on something?