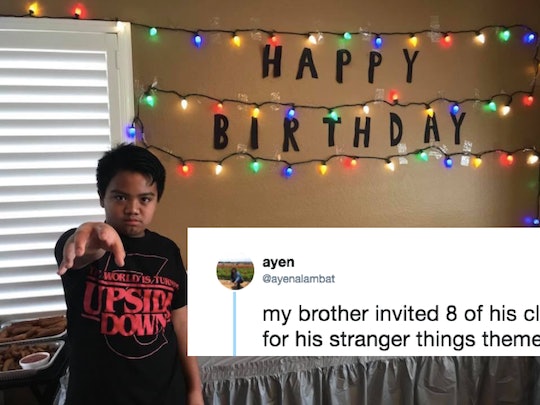 A Boy Went Viral When No One Came To His 'Stranger Things' Party, & The Cast Responded

It's one of those things people tend to fear the most; throwing a party and not having a single person show up. All the time and effort you put into the food, the decorating, the planning, and then no one comes? It would be bad enough as an adult, but it's devastating when you're a kid. But it's exactly what happened to one boy who threw a Stranger Things party. Fortunately for him, the birthday boy got the best surprise from Millie Bobby Brown and Gaten Matarazzo, which I'm pretty sure makes up for things on a pretty real level.

Aaron Alambat from California put together a pretty incredible Stranger Things party to celebrate his birthday last week. Not only did he and his family decorate the walls with the Joyce Byers-themed Christmas lights spelling out "Happy Birthday," but they even had a themed beverage that was meant to be Demigorgon blood. In other words, it was next level. Unfortunately, Aaron's sister Ayen tweeted that not a single one of Aaron's eight invited guests showed up to the party. Which is just sort of unspeakable in the world of kids, you know? Aaron got to cut his cake with his family, but it was certainly upsetting. And his protective sister wasn't having it.

The internet was quickly pretty furious as well. Ayen's tweet went viral within hours, with more than 250,000 likes and 55,000 retweets. People from all over the country wanted to wish Aaron a happy birthday and offer him comfort through his sister's Twitter page that, despite how hurtful it must have been to have no one show up to his party, this too shall pass.

There was one tweet, however, that must have made Aaron incredibly happy. From Eleven herself, Millie Bobby Brown from Stranger Things. Telling Aaron that she and the rest of the Stranger Things cast would have happily come to his party. I mean... can you even imagine?

As if it isn't exciting enough for Aaron to get the news that Millie Bobby Brown not only heard about him but would like an invite for next year, Gaten Matarazzo (who plays Dustin on Stranger Things and is basically my favorite character on the show) tweeted that he would join the party next year as well. And bring along the chocolate pudding.

So... next year's party at Aaron's house looks like it's going to be pretty amazing. And his older sister Ayen responded on his behalf with a thank you to Brown, telling her that Aaron "loves you and the whole cast."

Engaging on a real level with fans has become something of a social media hallmark for the cast of Stranger Things, and probably one of my favorite examples of the simple way celebrities can effect positive change on social media. Take David Harbour, for example. Harbour plays fan favorite and everyone's not-so-secret dad crush Chief Hopper on Stranger Things, and he has taken to using his Twitter feed to connect with fans in real life. First, a girl graduating high school asked Harbour how many retweets it would take for him to take her grad photos with her. Harbour responded, "25 k. And I get to wear the school sweatshirt and hold a trombone."

Well... she got more than 25,000 retweets. And Harbour made good on his promise.

I hope Millie Bobby Brown and Gaten Matarazzo follow in Harbour's footsteps and follow through as well. Because it looks like Aaron and his family throw a great party. And having the Stranger Things cast show up at your birthday after such a let down the year before will be just about the best redemption story ever.