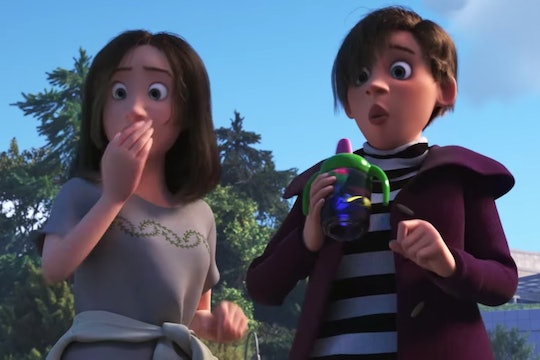 When Ellen DeGeneres revealed the trailer for Disney Pixar's animated film Finding Dory on her talk show in May, fans were pumped. That's because the animated journey of the amicable blue tang fish with short-term memory loss to find her parents in the vast ocean is the sequel to the wildly popular, Oscar-winning movie Finding Nemo of 2003, which touted similar themes of friendship and strong family ties. But Finding Dory debuted June 17 in a very different political climate than its predecessor, and from the moment they saw the trailer, many believed they had possibly caught a glimpse of Disney's first-ever depiction of a same-sex couple. Many are responding with support and celebration to the history-making couple, but some aren't being as accepting. Here's why a boycott is the wrong reaction to the lesbian couple in Finding Dory.

The moment is fleeting in the trailer and is still unconfirmed. Two women, one with a short haircut, are startled when they find a baby octopus inside a stroller they'd been pushing during a walk in Marine Life Park. That's it. Still, while some were ecstatic about the representation, albeit passing, of what looks like an LGBT family, others pledged to boycott the film altogether.

Of course, DeGeneres herself is a lesbian, and she voiced Dory both in Finding Nemo and Finding Dory, proving that those who would boycott a movie over a scene with a possible lesbian couple that lasts for about three seconds aren't especially deep thinkers. But that hypocrisy is entirely beside the point. A boycott of Finding Dory feeds into the idea that same-sex couple are the nefarious "other" rather than just as normal as any other family. It teaches kids that it's OK to discriminate against others for not fitting into prescribed cultural norms, and that they may need to hide who they really are as they grow up.

The deadliest mass shooting in the history of the United States happened at a gay nightclub in Orlando last week, killing 49 people who were mostly Latinx members of the LGBT community and making clear that homophobia and hate are certainly thriving in some pockets of the American consciousness. While boycotting a movie explicitly to "protect" kids from exposure to a variation of the traditional family is not a major act of violence, it contributes to the culture that marginalizes LGBT people and condones that violence. Worse yet, it passes those feelings of hate and bigotry onto impressionable children.

Even those who collaborated to bring Finding Dory to the big screen have balked at labeling the duo in the park as lesbians, rather than as sisters or friends. "They can be whatever you want them to be," director Andrew Stanton told USA Today. "There's no right or wrong answer."

And Degeneres herself, a gay rights advocate, simply denied that the two women were a couple during an interview with ET Canada:

It's really amazing, because it's two women pushing a stroller, which I didn't even notice, and one of them has short hair and apparently if you have short hair you're a lesbian. I did not know that was the rule. So, no, there's no lesbian couple. I don't think that that's the case.

But why would DeGeneres, who has done more to influence gay rights than any other celebrity, not embrace a benign snippet of a couple doing one of the most mundane things ever? Probably for the same reason that a study from GLAAD found that representation of LGBT-identified characters in studio releases is pretty dismal in general. It seems that mainstream entertainment is oftentimes wary of the backlash that could ensue when LGBT characters get screen time, especially in children't movies. Like, say, a boycott.

Additionally, what DeGeneres said is important: the fact that we assume a woman with short hair is a lesbian is steeped in harmful cultural stereotypes and does more harm to the movement against gender binaries and gendered representation.

Regardless, it's clear that representation in popular culture is so, so important for kids who are gay or who think they may be. The Finding Dory boycott debacle comes at roughly the same time that the internet is pushing the #GiveElsaAGirlfriend hashtag, urging Disney to depict the heroine of the popular 2013 animated film Frozen as a lesbian in a sequel. Alexis Isabel Moncada, the bisexual teenager who started the campaign wrote for MTV that "Giving young girls the chance to understand that a princess can love another princess the same way Cinderella loved her Prince Charming is vital to their development."

So, go see Finding Dory. I hear it's pretty great.