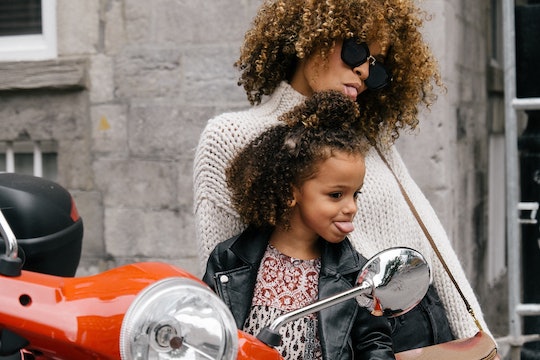 Here's What "Good Parenting" Is, According To A Child Therapist

If you don't stop and worry a few times a day that you're not doing it right, you are some sort of super parent. Every parent has days where they wonder if they're totally messing up their tiny humans. Or considers sending their kids back to wherever they came from. Which is why this advice from a child therapist to her mom friend is so necessary. Seriously, print it out and put it on your fridge so you can read it the next time you feel like pulling your hair out. Constance Hall, a popular blogger from Australia, posted a picture of herself with two of her kids at a restaurant — right at peak mayhem.

But the caption will bring tears of relief to your eyes. Hall wrote that she was sitting with a friend who just also happens to be a child therapist one day who looked at her kids and said, "You're such a good mum."

Hall did what many women and mothers do. She deflected the compliment by confessing that she felt like "a total fraud" because she struggles with handling her kids and the chaos and the screaming and never ending stream of questions and sticky hands.

Her friend responded perfectly. She said, that babies cry and teens whine because that's how they communicate.

...she responded with a statement that I haven't been able to forget, "Babies cry, it's how they communicate. Toddlers scream, children whinge and teenagers complain. Then mums say the words 'for fuck sake under their breath before every response. It's how we communicate. But guess what Con? It's better then silence.

That's when she started to drop some major truth bombs. The child therapist added:

A house full of screaming kids and fighting teenagers and a parent who's being thrown every question and request is a healthy one to me. It's the silent children, the scared toddlers, the teenagers that don't come home and the parents who aren't in communication with their children that I worry about.

And she should know — she's the professional parents turn to when their children need extra help. Hall's friend added that kids don't drive parents crazy. Parents were already crazy, because they decided to have kids in the first place. That's one of the craziest choices a person can make right?

Hall's friend's advice hit home for so many moms. In comments on her post, parents were so happy to hear that they weren't the only ones who felt like total frauds and wanted to strangle their own children. One mom wrote, "I've even flipped the bird on occasion to a child who has retreated to another room. (never to them of course...they'd prob give me a time out haha)."

Scores of others echoed, with, "me too! every day!"

Just remember that all the chaos means you're definitely doing it right and anxiety, frustration, and straight up fear are normal. So call up a friend, break out some cheese and crackers, and complain away. Because someone else definitely feels the same way you do.