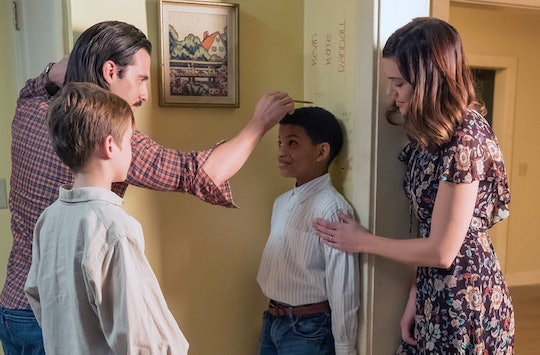 There were a ton of ways that fans theorized how Jack died on This Is Us and when it was revealed that it was related to a house fire, there were then new theories that stemmed from that. But no one would've ever predicted that a Crock-Pot started the fire on This Is Us, and Twitter is saying what we're all thinking when it comes to fearing the household appliance now. I mean, I'm probably never going to leave my slow-cooker on low overnight or when I'm not home now for fear of setting my own house on fire. But to be fair, mine isn't also close to 20 years old and mine doesn't have a faulty switch, which Jack and Rebecca had been warned about. Romper has reached out to Crock-Pot for comment regarding Tuesday's episode and the appliance's involvement, but have yet to hear back.

Tuesday night's episode of This Is Us was all about fooling viewers until the final moments, when the fire actually started and we had to walk down memory lane through each room of the house as it went up in flames. The elderly couple at the beginning of the episode, George and Sally, first seemed like the couple who was selling the home that Rebecca wanted to purchase to renovate. But it was later revealed that they're actually the people who gifted Jack and Rebecca with the very same appliance that started the fire on This Is Us. Though technically, Jack was the one who failed to turn it off properly. But since Jack can do no wrong, that left Twitter feeling a lot of emotions and the general sentiment was that the household item should be banished from the face of the earth — or, at the very least, from their own homes.

So many things had to happen in order for this terrible domino effect of events to have taken place. If only Jack had fully turned the appliance off. If only they hadn't had chili that day. If only Jack hadn't done the dishes that night, thereby leaving the dish cloth so close to the cooker. But really that's the most heartbreaking part of all of this. It's something that could've been avoided if one thing had gone differently. And Twitter wasn't afraid to let their feelings about the revelation be known.

Truthfully, I don't know how long anyone will really boycott their handy Crock-Pots, because they're one of the best kitchen inventions, second only to the air fryer — maybe. But already, fans are thinking twice about leaving theirs unattended because, to them, suddenly Jack and Rebecca are like a cautionary tale for the masses.

Although most fans probably didn't see it coming that a Crock-Pot would be the thing to be responsible for Jack's death, it certainly doesn't make it easier to handle by any means. And seeing the lower half of the Pearson home catch fire was only the beginning, since there's still an entire episode to endure that will actually show Jack's death. As in, we will actually see him die on our television screens.

I can tell you right now that I'm not ready. No one is ready. None of us will probably ever be ready. And don't even get me started on the promo for the next episode, which will air right after the Super Bowl on Sunday, Feb. 4.

Jack will obviously be the hero and make sure everyone else gets out unharmed because that's just the kind of person he is. But what will lead to his tragic fate? That has yet to be decided, but my money's on the fact that it'll have something to do with Kate's dog — hence why she was so hesitant to get one with Toby in the present day.

Crying over This Is Us is nothing new to fans. Well, sobbing uncontrollably is probably more accurate, but you can't help but wonder which inanimate object This Is Us will make us all cry over next.