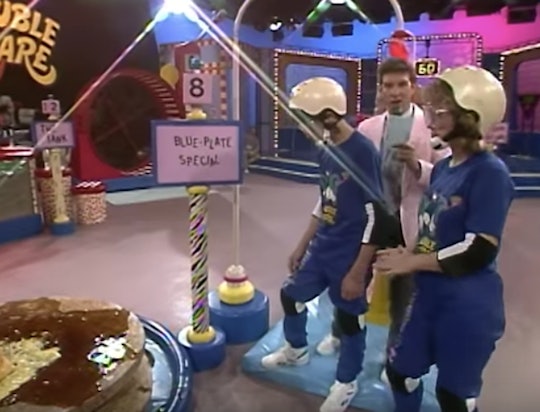 Just in case it wasn't clear yet: The 90s are officially back. And while bringing back scrunchies or fanny packs might not be for everyone, all of the television reboots most definitely are. Who doesn't love a good couch potato session? Of all the revivals out there though, Nickelodeon's Double Dare reboot might be the best one of all. For real, if you don't read this news, watch the old clips, and then immediately text your sibling about always wanting to pick the giant nose with them, can you even call yourself a millennial? I don't think so.

Just in case your parents didn't spring for cable until way too late in your life, or you were outside playing or something, Double Dare was one of Nickelodeon's most classic game shows. It premiered in 1986 and ran until 1993 and had two main parts. Hosted by Marc Summers, the original had two teams of two kids, usually siblings or best friends (there were later iterations of the show called Family Double Dare, in which parents played with their brood).

Here's how Summers laid out the rules each episode, "I'm going to ask you a question, and if you don't know the answer, or think the other team hasn't got a clue, you can dare them to answer it for double the dollars."

But, Summers would add, "Be careful, because they can always double dare you back for four times the amount, and then you either have to answer that question or take the physical challenge."

The physical challenges were gross. Like having to sit in a big bowl of fake spaghetti and pass a ball or something. At the end of the show, the team with the most points would get to run the obstacle course for more prizes and more money.

The timed obstacle course was the most epic part, in my opinion. They'd have to run around and grab flags, but they were in precarious place, like at the top of a slippery volcano, inside a giant nose with "boogers," or a big hamster wheel. It was intense, and according to Nickelodeon, the new show will have a lot of throwbacks, so you might want to familiarize yourself.

And Of Course, Some Badass Prizes/Product Placement

See? Aren't you excited? Nickelodeon is bringing the show back this summer with 40 new episodes, according to a press release. It explained:

With Double Dare remaining an iconic touchstone for its original millennial audiences, the new version will feature the gameplay and challenges they remember, as well as appearances from blasts from the past and stars from today.

Your kids will probably enjoy it, too. What's not to love? If they don't, you'll just have to spray seltzer in their face until an apple on their head falls off until they do. (Kidding, do not do that to your children.)

Whether anyone else in your household wants it or not, the show is coming this summer, though there isn't a premiere date just yet. There is also no word on who the host will be. For some, this could be a dealbreaker, since Summers is beloved.

"#DoubleDare is coming back this summer but no word yet if they're bringing back Marc Summers to host. Wasted opportunity if they don't," one old fan wrote. Others insisted on rioting if they had some other host. Summers, 66 years old, has been hosting a show on the Food Network since he left Nickelodeon, and raising awareness about obsessive compulsive disorder, which he has, according to the Los Angeles Times.

In an interview with People last year, he didn't seem to have any ill will towards the network, having returned for a 30th anniversary celebration, or all the slime he had to put up with over the years. He said that it was made of vanilla pudding, apple sauce and green food dye. “The insurance company made us guarantee if any of this got in the kids’ mouths it was edible. And it tasted good, and it smelled great," he joked, according to People. So his memories are sweet enough maybe for a long anticipated return.

Others People Were Ready No Matter What

Set your DVRs now, my millennial friends. And maybe we could petition Nickelodeon for some Legends of the Hidden Temple for next year?