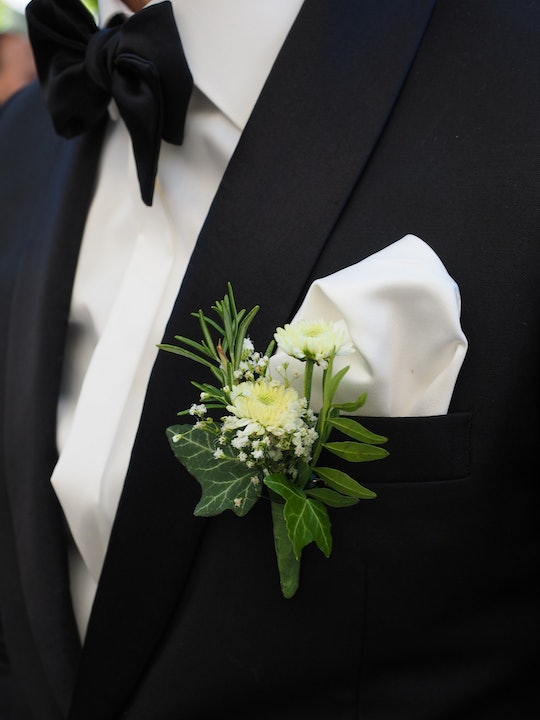 A Girl Was Kicked Out Of Prom For Wearing A Suit, But She Refuses To Back Down

Pennsylvania high school junior Aniya Wolf has never been a fan of dresses, according to TODAY, and, in the past, Bishop McDevitt High School never had a problem with it. Wolf reportedly wears pants to class, and wore them to a homecoming dance with no issues. But on May 6, she said she was kicked out of prom for wearing a suit. Wolf's mother, Carolyn, told TODAY that a copy of the school's dress code she received in March stated that "Dresses are to be formal," but didn't mandate that girls wear only dresses. Then, just hours before the prom, she received a call from the principal, Sister Mary Anne Bednar, warning that Aniya would not be allowed into the prom if she wore a suit. Romper has reached out to both Aniya and Bednar for comment.

Carolyn met with Bednar after the phone call, and she said that Bednar told her, "Aniya has a woman's body so she should be in a dress." When Aniya showed up that night in her suit, she said that students and parents cheered for her and told her she looked great, but then Bednar pulled her out of the ticket line and told her to leave. In a show of support, many of her classmates wore pants to school the following Monday. She's also received tweets of encouragement from Montel Williams and professional soccer player Ashlyn Harris, among others.

Aniya believes that she was discriminated against by the school because she is gay. She said that the dress code focused on modesty for girls (which is a whole separate issue of sexism and rape culture, but let's leave that for another day), but she saw girls wearing "tight dresses showing cleavage" admitted to the dance. "I don't think they can pick and choose what rules they enforce," she told TODAY. "It is an attack on my sexual orientation. It's saying, 'We don't want you in our prom. You're a freak of nature.'"

Bishop McDevitt High School posted a statement on the school's website claiming that "The dress code for the prom specified girls must wear formal dresses," but according to the Wolfs, the original dress code made no such distinction, and they were sent an updated version the day of the prom. The statement offers no explanation as to why girls aren't permitted to wear suits, but insists that "we love, respect and cherish all of our students," and "will continue to practice acceptance." Wolf doesn't seem to be feeling much acceptance from her school right now, but the good news is that she's found it elsewhere.