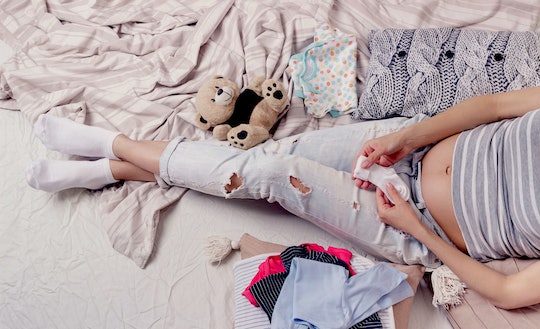 You Cannot Tell A Mother How To Grieve On Social Media

Rarely do I think about the day I lost a twin at 19 weeks gestation, or the day I birthed my son, along with the diminished remains that would have been his sibling. Time has moved me forward, the sharp corners of my memory have been smoothed to a dull edge, and I'm focused now — as I was then — on my son and my romantic relationship and my career and myself. But when a grieving mother was recently shamed for posting pictures of her stillborn baby on social media, corners were sharpened, a dull edge felt painful, and my focus shifted to the judgment and misunderstanding I shouldered after I experienced a second trimester miscarriage, a complicated birth, and, years later, three miscarriages.

You don't see loss in your Instagram feed of babies lying next to letter boards and Maileg toys, but it is everywhere. Each year in the United States a reported 25,000 babies, or 68 infant a day, are born still. That accounts to about one stillbirth in every 115 births. According to national estimates, 15 to 20 percent of all pregnancies in the United States end in miscarriage, and two to three percent of all pregnancies are lost in the second trimester. The United States has the worst infant mortality rate among other wealthy countries in the Organization for Economic Co-operation and Development (OECD), and babies born in the United States were three times more likely to die from extreme immaturity, and 2.3 times more likely to experience sudden infant death syndrome, than 19 other OECD countries between 2001 and 2010.

In other words, though the U.S. is a death-denying society, pregnant women here are at a higher risk of experiencing pregnancy or infant loss, with a paucity of ways to grieve.

Even though pregnancy and infant loss cross every racial and economic boundary, our cultural impulse to hide death away has kept bystanders from witnessing trauma, grief, and the myriad ways in which both are processed and expressed. So when the veil is lifted, they react poorly.

When Yasmine Indiaa posted pictures on Instagram of her son, Jeremiah, who died two days before he was born due to a rare birth defect called gastroschisis, she was attacked by those who saw her post for being an "attention seeker." Commenters said the pictures of her child were unpleasant, morbid, and "creepy." One wrote, "Girl, not everything has to be for public! Go grieve for real! You're doing the most now and it's sad."

This misplaced judgement is familiar to me. In my case, when I refused to look at the remains of a dead fetus I had carried and birthed — in fact, when I decided to refer to the remains as a "fetus" at all, and not a "baby" or the name my partner and I had originally picked out when a tiny heart was still beating and still-forming legs were still kicking — I was called "heartless" and "cold." Incredibly, I was accused of being thankful because now, with one child, things would be "easier."

Our society's relationship with death and all that follows is perplexing. After a tragedy — most recently, and often, mass shootings — we pore over pictures of fleeing victims and cling to stories of heroism and heartbreak. Yet we do not want too much detail, too much pain, or too many stories that don't end happily; that don't give us hope; that don't make us feel somewhat better about our inevitable mortality. People don't want to see the full scope and depth of grief, especially if it makes them uncomfortable, but they want to know a person cares x amount so they feel better about the state of humanity. We want grief to be performative but not too performative.

"Death and dying became almost unmentionable words over the course of the last century, topics not to be brought up in polite conversation," writes Lawrence R. Samuel Ph.D. in Psychology Today. Yet it is the one thing that also binds us all together, and turning death into a "horrible little secret" has limited our abilities to understand it, process it, grieve it, and allow others the space to do the same and on their own terms. "Denial became the operative word, because death is oppositional to our culture's defining values, like youth, progress, and achievement.”

And because we don't "do death" in society, women who experience miscarriages and stillbirths are encouraged to suffer in silence, suffer a specific way, and feel guilty if they break the norms.

You cannot tell a mother how to grieve any more than you can tell her how to feel.

But social media can, and in many ways has, pulled back the curtain we've relied on to separate us from death and the complex ways it is experienced and observed.

“Even before we had social media, we were beginning to see the story lines of 'I have cancer and this is what it's like to go through the treatments'," Christian Sinclair, a hospice and palliative medicine doctor, told The Atlantic. "Social media encourages a lot more of that.” And the more we, as a culture, are exposed to various degrees of mourning and grief, the more we can accept that both come in a variety of forms that should be respected, not condemned.

Two days after I was told one of the twins I was carrying no longer had a heartbeat, I was smiling and laughing. As I was carrying life and death inside of me for upwards of 20 weeks, I was also focusing on work and grabbing non-alcoholic drinks with my non-pregnant friends. And years later, after my third miscarriage, I had a party of sorts, which included Pho, a skin-tight black dress, and copious amounts of whiskey.

And through every situation, included ones that aren't my own but that I witness via Facebook or Twitter or Instagram, I am reminded that enduring a loss inside your body is an odd experience. How we, as loss mothers, react to that experience can appear to be just as odd, especially with our collective limited exposure to death. But a term as subjective as "odd" doesn't mean a response to trauma that make us uncomfortable is wrong.

You cannot tell a mother how to grieve any more than you can tell her how to feel. And if a mom is grieving publicly, know that while it might make some people feel awkward, her public anguish might feel excruciating, or her seemingly disconnected response might appear to be callous, she is also providing a tangible lifeline of understanding and solidarity to others who are grieving, often in silence, too.

Like all parents, the mourning mother is teaching us something about life. It's time we start paying attention.