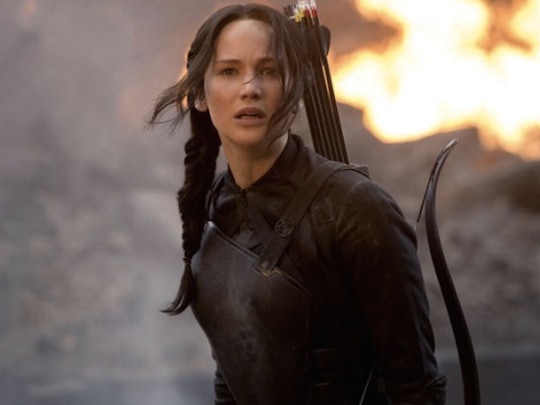 A 'Hunger Games' Prequel Might Be In The Works, & Here Are 5 Storylines We'd Love To See

This just in Katniss fans: Lionsgate vice chairman Michael Burns announced earlier today that he's got plans for The Girl on Fire — and they take place long before the first Hunger Games ever happened. Speaking at the UBS Global Media and Communications Conference in New York, Burns and co. announced that they are considering developing prequels to The Hunger Games movies. Yep, you heard that correctly: Prequels for The Hunger Games series. But based on what we know about their post-apocalyptic world, what would The Hunger Games prequels be about? Before we go any further, you should know massive, serious, explosive, heartbreaking spoilers are going to happen. So consider yourself warned. Or don't. But don't come crying to us when the movies or the books are spoiled for you because you didn't read this first.

Fans of The Hunger Games trilogy will be the first to tell you that there isn't much to explore beyond the series' ending: Katniss ends up back in what was District 12 with Peeta and Haymitch, her children, and her unyielding heartbreak. It's a sad ending, sure, but it makes sense — and after all that Katniss has been through, enthusiasts can understand why The Girl on Fire and her beloved didn't get the cookie-cutter happy ending. After losing Prim, how could she?

Burns speculated that fans of the four-part movie series missed the non-stop, edge-of-your-seat action that was present in the first three films (and notably absent in the fourth). The prequel, Burns, alluded to, was a way to remedy that, as well as to continue the story of Panem in a time before Katniss existed.

The one thing that kids say they missed [from the early Hunger Games films] was there were no arenas. If we went backwards, there obviously would be arenas.

So what, exactly would the prequels cover? And would it be all Hunger Games, or is there another story to tell? Well, there are a lot of possibilities, but here are some of our best guesses (film execs, take note):

The Origins of Panem

Panem, the gerrymandered setting of The Hunger Games, is a totalitarian testament to inequality. The capital's got the cash and the crazy fashion, and all the other districts have the resources and the wilderness, but not much else. They're forced to live in near starvation.

But how did it come to this? We can guess, but a prequel may be able to show us the link between the world as we know it now and the quasi-futuristic dystopia shown in The Hunger Games.

We know that the death of Katniss' father in the mines marked a departure from youth to caregiver for Katniss, with respect to Prim and her mom, who never quite recovered. Hunting with Gale provided a reprieve from the day to day monotony that life in District 12. The books go into more of her past than the films do, but learning more about Katniss' parents, their struggles, and Katniss and Prim as young girls would be great material for a prequel.

Plus, maybe we would get to see the beginnings of her romance with Gale. (For what it's worth, I am #TeamGale.)

Even under strict authoritarian rule, the Districts of Panem are hardly peaceful places. There's a history of struggle, rebellion, in-fighting, and mass movement carved deep into each border. It'd be fascinating to watch a prequel about the previous rebellions against the Capital that have tried, but failed. Seeing that would add some depth to Katniss' rebellion, plus it would give us a good idea of what exactly she's up against. Who did the districting? Why? How did they convince people to go along with that? All questions that need answering.

The Origins of the Games

One of Michael Burns' priorities is getting back to the arenas. The latest film doesn't feature any bloody arena matchups, and he thinks that's why it didn't do as well as the previous films. Here's an idea: a prequel just about the Games. Who was the first designer? Who were the first fighters? How was it marketed? If I had any say I'd want it to be like a mockumentary-style history film gone awry. Super-meta.

When it comes down to it, I'd see any of these. Really, anything remotely tied to Katniss Everdeen, I'm into. There are a lot of mysteries to this world author Suzanne Collins has invented; this would be a great chance to clear some of them up. We need answers.

Haymitch never talks about his bout in the Games, and the only glimpse we're awarded into his world comes in the second book, Catching Fire, when Peeta and Katniss study video tapes of previous games to get to know their competitors. The forray into Haymitch's games is short, but a prequel could delve deeper into Haymitch's storyline: What did he do when his name was called? How did he prepare for the games? What losses does he carry with him, and what did he have to do in order to win?

Before Katniss and Peeta, Haymitch was the only other victor to come from District 12. Would be interesting to know what his life was like before, during, and after the Games.