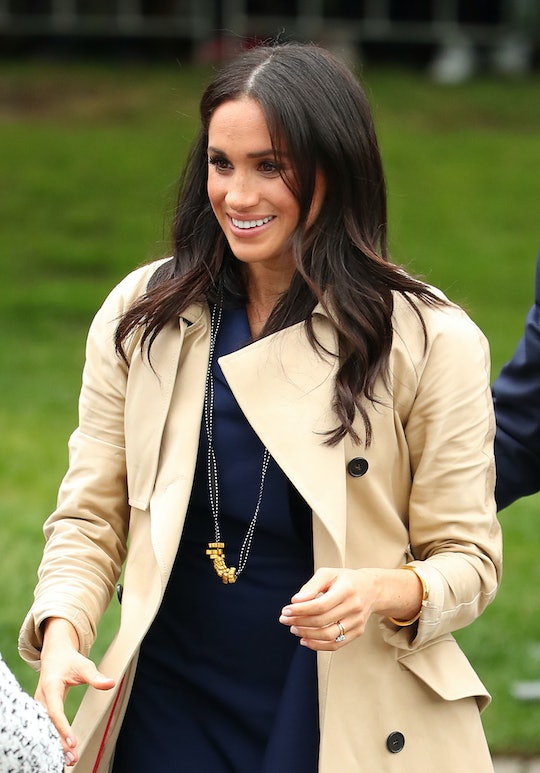 I could be projecting my own excitement onto the Duchess of Sussex, but I sort of feel as though she seems more engaged with little kids ever since she announced her pregnancy. Sure, she's always struck me as a pretty warm person, but now that she and Prince Harry are expecting? She's giving off seriously sweet mom vibes as the couple tour around Australia, and it's wonderful. Like when a little boy made Meghan Markle a pasta necklace and she proceeded to wear it all day with pride. Talk about a mom move, am I right?

Markle and Prince Harry were visiting Melbourne, Australia on Wednesday and subjected to the usual throngs of adoring fans and gifts. Flowers, of course, but also stuffed animals for the baby they are expecting in the spring, as HELLO! reported. But there was one gift that stood out from the rest, probably because it was delivered to Markle via a 6-year-old boy dressed up as a pilot for the Australian airline Qantas.

Little Gavin Hazelwood made Duchess Meghan a necklace strewn with pasta to celebrate her arrival on the continent, according to People, which would have been pretty cute on its own. But the fact that Markle immediately draped it around her neck and wore it for the rest of the outing?

It seems young Gavin was so excited to meet Markle that he faked being sick to get out of school for the day to make the necklace, as he told The Sydney Morning Herald. He admitted that his mother helped to make the necklace extra special with some gold paint. After all, it had to be fit for a princess.

When he met Markle he held up a sign that read "I made you a necklace," hoping she would wear it. Which she obviously was happy to do.

This isn't the first time the Duke and Duchess of Sussex have been giving off those sweet parenting vibes since their arrival in Australia, which is their first official tour overseas since getting married in May. When the couple landed in Dubbo, Australia their flight was met by a gaggle of excited kids from nine area schools, according to Town & Country. Both Prince Harry and Markle, who was wearing heels and is pregnant so you know it was way harder for her, crouched down to hug some of the kids.

One little 5-year-old boy named Luke Vincent even broke through the (admittedly flimsy) rope line to hug them both and touch Prince Harry's beard because apparently "his favorite person is Father Christmas," as reported by E! News.

Both Meghan Markle and Prince Harry have arguably been kind and thoughtful with kids in the past, but there's something about her pregnancy that gives their sweetness special meaning. Because in the not-too-distant future, they'll have their own little one to hug and enjoy. And if their child makes Meghan Markle a pasta necklace at any point down the road, you better believe she's going to wear that thing with pride.