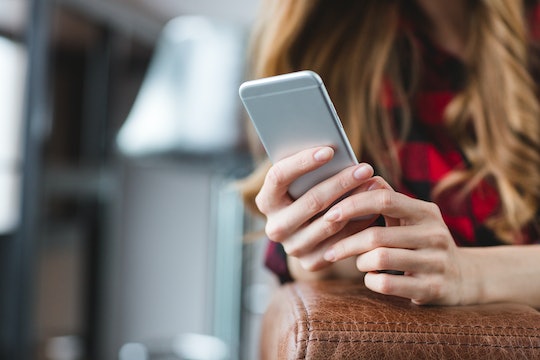 Most Parents Snoop Through Their Kids' Phones & Think It's Necessary, New Study Finds

Have you ever been tempted to snoop on your kids? At any age, of course, but especially when they hit those teen years. When they become the tops of their heads at the dinner table and the sound of breathing behind their closed bedroom doors. These secretive people you don't always recognize and almost never understand. The temptation to spy on them is overwhelming. And it seems pretty much no one is immune to it. In fact, a recent study has found that most parents snoop on their kids' phones, and honestly? As a mother of teens I can totally understand.

A new study conducted by ParentWise, as reported by the New York Post, looked at 2,000 American parents of school-aged children and asked whether they had looked through their kids' phones. The idea of the study was to get a handle on the risks and struggles of raising children in a digital age. And here is what the researchers found; almost all parents — 75 percent — admitted that they had snooped through their child's devices, according to the New York Post.

A whopping 84 percent, as a matter of fact, and most of those who admitted it felt this was a necessary step to keeping their child safe. What about a child's privacy, you say? Nope. According to the study, according to the New York Post, 60 percent of parents don't feel children have a right to privacy on their devices.

So I totally understand both sides of this particular coin. You want to keep your kids safe, but you also want them to learn how to move responsibly through the world without having to be policed at every turn. This has been a parent's dilemma for years, but with the advent of the internet it's perhaps a more serious struggle than ever before. For instance, when I was in high school, I used to worry my mom would look through my diary (I know, easy fix; just don't have a diary) or eavesdrop on the phone, but the stakes are simply higher now than they once were.

Kids have access to more information than ever before, and are therefore at a greater risk of getting mixed up in trouble than ever before. They're also experiencing technological autonomy at a young age; as of 2016, The New York Times noted that the average age for a kid to get their first smart phone was only 10 years old.

The fact that kids are using technology is causing parents an even bigger headache, according to the study. While 84 percent of parents are totally cool with spying on their kids, most of those parents figure their kids will be able to outwit them anyhow, as the New York Post reported.

Researchers for the ParentWise study reported that 58 percent of parents with children between the ages of 4 and 10 admitted they believed their children knew more about navigating technology than them. And nine out of 10 parents believed their child's phone was having a negative impact on their lives. But the reality is this; raising your child without technology in the 21st century is probably not going to happen. And if the majority of parents think that their covert snooping isn't effective, perhaps things need to change.

Family counselor Alyson Schafer wrote in a 2016 op-ed piece for HuffPost that parents should consider training kids how to use the internet, much like we train them to ride a bike. You start out riding next to them and teach them the rules... then gradually pull away. She also recommended installing safety apps that would pick up key words like "suicide" in your child's online communications. And while Schafer considers it a good idea to check in every once in awhile to make sure they're behaving appropriately, she encourages parents to be open with their kids about it.

If the parents who took part in the ParentWise study are truly representative of parents across the country, it seems that snooping is everywhere, but it might be ineffectual. Here's hoping we find a better way, and soon.