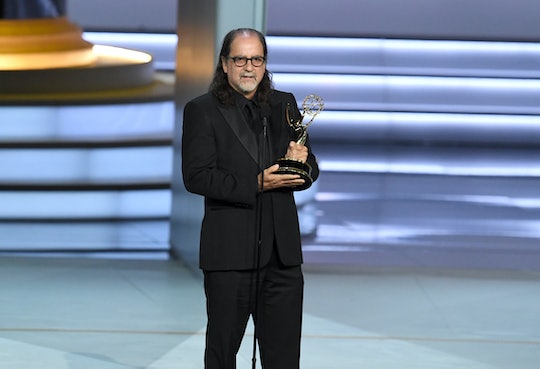 Pass The Tissues Because, Yes, An Epic Marriage Proposal Just Happened At The 2018 Emmys

Well fellas, good luck with that marriage proposal you've been planning. Thinking of going up in a hot air balloon? Yawn. Proposing with food? Big deal. Think again, because a marriage proposal just happened at the 2018 Emmys and it was honestly the most beautiful thing ever.

Before I give you all of the glorious details, let me set the stage for you, shall I? After all, Glenn Weiss, the man in question who popped the question from the stage, won his Emmy for directing a variety special. Namely, the 2017 Emmys. So this guy knows a little something about setting the stage.

Weiss stood in front of the mic at the Microsoft Theater in Los Angeles and initially told a pretty sad story; it seems he lost his mom just two short weeks ago and admitted that a part of his heart "felt broken and like it will never heal again," according to CBS News. Presenters Sterling K. Brown and Ron Cephas Jones stood in the background looking solemn and respectful.

And then... the mood shifted. Weiss directed his next comments to his girlfriend, saying his mom had always loved her and told him to "hold on to his sunshine." He then told her she was the "sunshine of his life," which would have been enough, in my opinion. Except he didn't stop there.

He proceeded to essentially change the way men will propose forever by asking his "sunshine" to marry him at that moment. And it was the best thing ever.

Of course everyone lost their minds. Including Sterling K. Brown in the background.

Fortunately, Weiss' girlfriend said yes. Even when he joked "I haven't asked yet," she just kept crying (as did everyone else, including me) and got up on stage to a standing ovation from one of the most famous rooms on the planet. Weiss handed her a special ring from his father and the two kissed, leaving one to wonder what he would have done if he hadn't won?

The internet went wild for the proposal.

The person who had the best reaction to Weiss' proposal? Leslie Jones, who pretty much lost her mind in the best way.

If you think too hard about this proposal, it's actually pretty wild. Weiss was winning an award at a live awards show for directing an awards show. And then he sort of hijacked that awards show with his proposal. What if he wins an Emmy for his proposal at the 71st Emmy Awards next year? How crazy would that be?

That's what a cynical person might say about Weiss' Emmy proposal, not me. For my part, here is what I saw: a man who lost his mom and realized what was important in his life. A man who had the opportunity to do something beautiful and huge for his girlfriend and decided to seize the day.

And in doing so, ruin all marriage proposals forever.

More Like This
Tia Mowry & Cory Hardrict Announced They Are Divorcing After 14 Years Of Marriage
Reese Witherspoon Doesn’t Think Her Daughter Looks That Much Like Her
The White Lotus Is The Perfect Treat For After The Kids Go To Bed
'Virgin River' Season 5 Is In The Works, So Here’s Everything We Know So Far