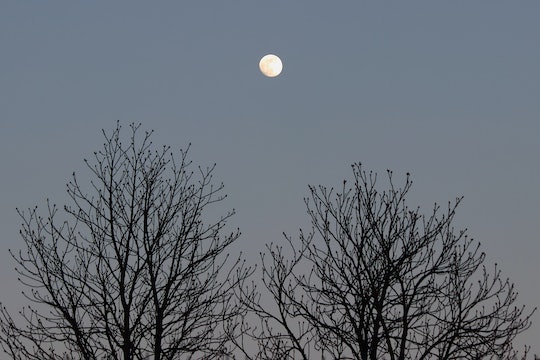 If you're into Halloween and all things spooky, here's something that will make your superstitious heart sing: Friday the 13th this fall comes with a full moon, and not just any old moon, but a harvest micromoon. So what superstitions surround a micromoon on Friday the 13th? Should you step outside to catch a glimpse, or hide inside and close the curtains? And what even causes the moon to become "micro"?

The Farmer's Almanac explains that the harvest moon is the full moon nearest the autumnal equinox. It got its name because, as the days grow shorter towards fall, for several evenings in a row, the moonrise comes sooner than usual after sunset. This created enough light for farmers to continue harvesting their summer crops at night. This year's harvest moon happens to land on Sept. 14 for those of you in the Eastern Time Zone — 12:33 a.m. to be exact. But in Central, Mountain, and Pacific Time Zones, the harvest moon will shine bright on Friday the 13th. (Fun fact: The Farmer's Almanac says the full moon occurring on a Friday the 13th only happens about once every 20 years!)

But this year's harvest moon, which would normally appear huge and bright, is a micromoon. Astronomy site TimeAndDate.com says a micromoon happens "when a full moon or new moon coincides with an apogee." That's a little known science term, but put simply, the apogee is just the part of the moon's orbit that's farthest from the Earth: 252,100 miles.

Both Friday the 13th and the harvest moon are full of superstition and special traditions across different cultures. Encyclopaedia Britannica noted that Chinese and Korean cultures both celebrate the harvest moon with huge festivals. The Mid-Autumn Festival (Zhongqiu Jie) is also known as the Moon Festival, and usually families host big reunions and enjoy moon cakes with sweet filling inside. In Korea, the Chuseok festival is actually a national holiday, according to Encyclopaedia Britannica. People travel to spend time with their families, play games together, pay tribute to their elders, and more.

Also, one superstition about full moons says that if you go outside with an empty purse or wallet and say “full up” nine times, within a few days, you will come into money, according to InPureSpirit.com. The moon will literally cash you ousside, how 'bout that? And as for Friday the 13th, well, you've probably heard that's when all the ghouls and goblins come out at night.

While the movie Friday the 13th linked a raging masked killer with the day, there is evidence that this date is... more than unlucky. History.com says numerous tragic incidents have occurred on Friday the 13th, including the German bombing of Buckingham Palace in 1940, a cyclone that killed more than 300,000 people in Bangladesh in 1970, the death of rapper Tupac Shakur in 1996, and many more.

A study in the British Medical Journal even found that "the risk of hospital admission as a result of a transport accident may be increased by as much as 52 percent on the 13th." While the study's authors admit their data set was too small to draw any solid conclusions, it's still spooky. With that in mind, will you brave Friday the 13th to steal a glance at the micromoon? Or will you be peeking through the blinds instead?