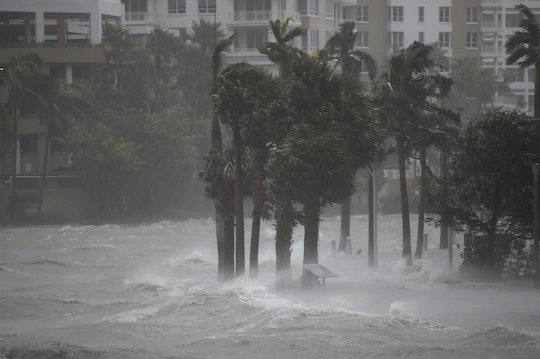 One Mom Delivered Her Own Baby During Hurricane Irma

In the face of disaster, women can do anything that they put their minds to. Really. This statement isn't something new and you probably know that already. But every day, women all over the world are reminding people just how strong they are. For example, a mom delivered her own baby during Hurricane Irma, proving just how resilient women are when left to their own devices.

Hurricane Irma, its size, and massive path of destruction has forced millions of people to evacuate from their homes in Florida. Florida Gov. Rick Scott pleaded with residents last week, asking them to evacuate the state before the storm wreaked havoc and the situation became dire, according to ABC News. "If you're in an evacuation zone, you've got to get out; you can't wait," Scott said in an interview on Good Morning America. "This thing's coming." Still, due to personal reasons, some people chose to wait out the storm and stay in their homes.

In the Little Haiti neighborhood in Miami, one woman who chose to wait out the storm found herself in, well, an interesting predicament. At 3 a.m. on Sunday, just as the hurricane approached the Florida keys, a woman in Miami reportedly called 911 and told them that she was in labor. But due to the strong winds, it had been dangerous for rescue services to respond to the call, according to The Washington Post.

Two hours later, the woman called again to tell them that she was going to give birth. Yep, the baby was on the way and there was no one on the way to help.

According to a tweet from the city of Miami, the unnamed woman and her baby girl were transported to the hospital in the morning once responders were able to get to them. Thank goodness. Miami Assistant Fire Chief Eloy Garcia told the Miami Herald all about the amazing birth:

We weren't able to respond. So she delivered the placenta, also. Dispatch told her how to tie it off. She's stable at home. We made contact with the assistant medical director here. Talked things through.

Just a few weeks ago, in Houston, Texas a similar situation played out. One woman unable to cross dangerous flood waters to get to a hospital, went through much of her delivery in a hotel meeting room, with the help of three nurses staying in the hotel, according to The Washington Post. Another woman in Corpus Christi, Texas gave birth in her home during Hurricane Harvey before EMS rescue could reach her, according to TODAY.

But if it seems like there is a spike in "woman gives birth during hurricane" stories this time of year, there is a scientific reasoning behind it. According to Nola.com, the drop in barometric pressure associated with the storm could cause a pregnant woman's water to break. This is why Miami-area hospitals, according to Reuters, offered shelter to pregnant women ahead of time, preparing for an increase in births.

Even when it comes to facing high flood waters and strong winds, these babies simply would and could not wait for paramedics to arrive, or for the storm to pass. And these women, well, they handled childbirth like the strong moms they are.