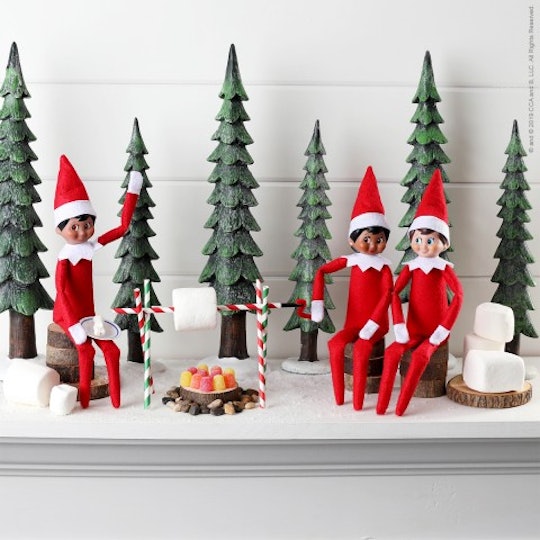 The only other elves who understand are those in the trenches with you. Photo credit: Elf on the Shelf

Scene From The Elf On The Shelf Staff Lounge

All over the world, families celebrate the coming of Christmas with Elf on the Shelf. During the day, the scout elves observe their children carefully, making a mental report to share with Santa. At night, they return to the North Pole to share their reports and relax in the staff lounge before heading back out..

Jingle: Buddy! Over here, I saved you a seat!

Jingle: How are the Wagner kids this year? Nice list?

Buddy: I'll give them this — those kids know how to work together, so I guess that's kind of nice. But, then again, so did the hit men in The Godfather so...

Holly: *sitting at table* Are you telling her about the Wagner kids?!

Buddy: Yup. It really is super entertaining. It's like living in the most bonkers reality show you've ever seen! What are those two going to do next? Hysterical.

Jingle: Didn't they once eat an entire advent calendar in one sitting when their moms weren't looking?

Holly: Your heart goes out to all of these parents on some level, right? I'm not saying our job is easy — the daily North Pole commute is murder — but they have to watch these kids 365 days a year! Can you imagine?!

Buddy: And be responsible for them! What were those deluded mortals thinking?!

Jingle: Seriously! Just watching them gets exhausting and that's all we have to do — watch!

Buddy: Don't forget the judging. The judging is the best part!

Figgy Pudding: *rooting around in the fridge* Where the elf is it?!

Holly: What are you looking for?

Figgy Pudding: Creamer! My creamer. Everyone acts like it's communal, but it's not! I bring it from home!

Jingle: Did you label it?

Figgy Pudding: Of course I labeled it! *sighs* Sorry, I didn't mean to snap. It's just a huge pet peeve of mine. Who takes something that doesn't belong to them like that?

Holly: Rough day at the Garcias'?

Figgy Pudding: They had me hanging upside-down from the chandelier all day. I'm still reorienting and that's a lot harder to do without a good cup of coffee. And of course they...

Buddy, Jingle, and Holly: ...took a picture and put it on Facebook...

Jingle: We've all been there. It's the worst part of the job.

Figgy Pudding: Well, that and inconsiderate co-workers who take your creamer without asking.

Elf in the Background: Hey, where's my sandwich?!

Buddy: *slowly brings a turkey club to his mouth and starts chewing*

Holly: And it can be way more embarrassing than chandelier acrobatics. Last year, Patty — that's the mom in my family — she baked some peanut butter kiss cookies... you know, the ones that have a Hershey kiss in the middle of them?

Jingle: I hate this story already.

Holly: Patty made it look like... she put me in a squatting position over the cookies, you see...

Buddy: We got it, Holly!

Figgy Pudding: Why do they do this?

Holly: *ominously* No one knows...

Buddy: They say it's to entertain the kids, but I'm not so sure. I'm pretty sure a lot of them are doing it for the 'Gram...

Holly: And the best part is when they have the audacity to complain about it. "Wah wah wah! I need to keep moving the elf!" Like "Listen, people. We didn't ask to be put in humiliating poses every day." Move us around, of course! Everyone need a change of scenery, but all these Pinterest inspired tableaus aren't necessary.

Figgy Pudding: So this happens to everyone?

Jingle: Well, not everyone. Some of us don't get moved for two and a half weeks.

Jingle: Doug and Lisa keep forgetting, but then when Sophia points it out they say something like "Oh, Jingle must be really comfortable where she is! I guess this is the best spot in the house to see everything!" No, Lisa! She isn't and it's not! Jingle is actually very uncomfortable and *fighting back tears*... and so lonely and bored... *bursts into sobs*

Buddy: I'm so sorry I had no idea.

Jingle: *dabbing eyes with tissue* It's just like... if you're going to bring an Elf into your home, you have to take some responsibility for them, you know?

Holly: *stroking her hair* Yeah... you're going to be OK though. Just a little bit longer until Christmas and you're done for the year. You can do it.

Figgy Pudding: Not for nothing? I hear the Cookie Tree is hiring.

Figgy Pudding: Come February everyone gives up on their New Year's Resolutions so they get started now.

Holly: And I hear those guys are union.

In the distance, a clock chimes

Buddy: Good luck, honey. I hope you get moved today.

Jingle: I hope the Wagner boys shape up.

Figgy Pudding: Thanks, Holly. *quietly folds Cookie Tree application in back pocket before leaving the lounge*