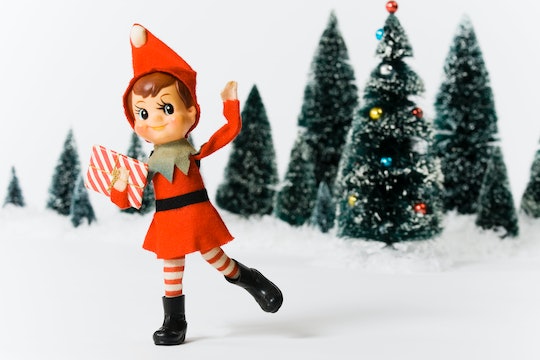 When you opt to take the red pill and buy an Elf on the Shelf package, you get a doll with a pointy hat, plastic head, and limp red fabric body, as well as a book that explains the tradition of the elf, an official certificate showing the elf belongs to your family, and free-floating cloud of unknowable mystery.

For any rookies out there, this "special scout" appears in your home around December 1 to watch your kids, returning to the North Pole each night to give Santa a report card. Just to make it fun, the elf is in a different place and doing something different each day, like hanging out with a snowman made out of stacked toilet rolls, or watching you with ominous eyes from the window blinds. And if you think that's where elf lore tops out, you're very, very wrong.

Elf culture dates back to 2005, when an English teacher, Chanda Bell, turned a family pastime into a children's book, The Elf On The Shelf: A Christmas Tradition, sold with a doll reminiscent of Enid Blyton's Noddy, among other vintage elves. By 2017, 11 million elves had been sold — sorry, "adopted" — per CNN. And things continued to escalate from there.

You can now pick a boy or girl elf with light or dark skin, and add to your elf family with Elf on the Shelf pets like an arctic fox, reindeer, or Elf Pets® Saint Bernard pup. Elves can dress up like a mermaid or rock star, or purchase a capsule wardrobe, allowing the elf to pivot between fancy attire and athleisure, depending on how energetic it's feeling. And this year, your elf can carry and deliver a baby.

The extra-canon but "Elf-compatible" baby kit available on Etsy comes with a crib, high chair, tiny accessories, and of course an elf baby. Not listed on the box, the set of questions the items raise, like "do these babies grow up from year to year?" and "who is supervising the babies while the elf jets home each night?" and "is it a good idea for babies to wear a tight-fitting scalloped collar?"

There is a cottage industry on Pinterest devoted to elf culture, with a heavy emphasis on "what the hell do I do with my elf today?" My favorite idea is having the elves be sick and/or have a broken leg so they can't move for a few days. To whoever thought of this, I am forever grateful.

From there, you can really disappear down a wormhole. This reporter decoded an alphabet made of stockings and Saint Bernards to determine elf on the shelf's age: 1,000 years old.

When they aren't spying on little children, the scout elves spend their time "sorting and answering mail at the North Pole," per the Elf on the Shelf website. The same vault of information was able to tell me, via a "What Kind Of Elf On The Shelf Mom Are You" quiz that I am a Laid-Back Scout Elf Mom: "More than anything, your Scout Elf loves doing what his name implies: sitting on a shelf."

The elf has really made it. From skits on Saturday Night Live ("all day they watch their child, never blinking and never moving") to becoming a fixture of the Macy's Thanksgiving Day Parade, the elf is everywhere. There's even a spinoff tradition, The Mensch on a Bench ("add more funukkah to Hanukkah").

If you're choosing to leave an air of mystery around the elf, you will be within the bonds of general elf lore if you follow these rules: