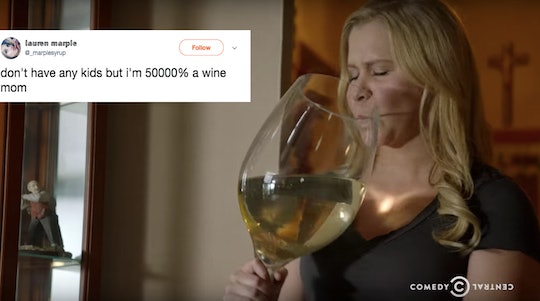 A Short History Of The Wine-Mom Meme

Most memes seem to spring from nothing and nowhere, leaving us to Google them secretly lest we reveal how clueless and un-hip we are to the Internet zeitgeist. This is not the case with wine mom. This particular meme is unique in that everyone knows — automatically, perhaps instinctively — what a wine mom is. In fact, I asked several people if they’d ever heard of it, and of the ones to whom “wine mom” was an unfamiliar concept, all of them followed up with “Well, I’ve never heard of it before, but…” and then proceeded to rattle off the Urban Dictionary definition almost word for word.

For those interested, here is how it is defined on Urban Dictionary: "Women who are in the older crowd (usually mothers) that sip wine throughout the night, and sometimes post on social media about it. Their posts are abnormally sincere, with comments made by fellow wine moms, relatives, or other parents. The main focus of a wine mom is to stay classy [and] share intriguing quotes (usually decorated with graphics dating back in 2004)."

According to Twitter, a mom drinking wine does not necessarily a wine mom make. The parameters for what constitutes a wine mom are very forgiving. You can be in your 20s and have zero kids, but if you are sprawled on a couch wearing sweatpants and drinking a crisp chardonnay after a long day of hard work and taxing emotional labor, you are well within your rights to call yourself a wine mom. Conversely, you can be a tired mom whose wine rack has been empty since 2015 and still identify as a wine mom.

But from whence did this concept emerge? Why does it make so much sense to us? The origins of the meme appear to be nestled deep within the labyrinthine nether-realm that is Facebook. That the two are linked appears to be common knowledge. Lily R., a self-described wine mom, tells Romper that a wine mom is someone who “simply likes to treat herself and occasionally post about it online.” Myia H. says, “It's a type of suburban mom who turns to wine in times of stress. I feel like there's a whole community of them on Facebook.”

You could just picture them posting memes on Facebook. You know, something like 'It's wine o'clock!' or ‘Of course size matters. No one wants a small glass of wine!’

Marvin S., who previously worked in a tasting room, says women who came through his winery often identified themselves as wine moms specifically. “These were mostly women in their 40s, but not exclusively,” he tells Romper. “You could just picture them posting memes on Facebook. You know, something like 'It's wine o'clock!' or ‘Of course size matters. No one wants a small glass of wine!’” 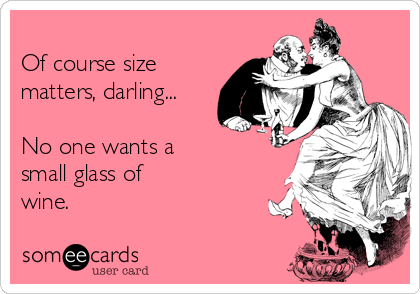 Just as we’ll probably never know who wrote Beowulf, we may never be privy to who was the first to refer to wine as “liquid patience” or to post “My doctor says I need glasses… glasses of wine, that is!” as their Facebook status. I feel we can safely assume this happened almost instantly after Facebook became available to the public (so, circa 2006), and that the name of the woman in question was probably something like Helen or Cindy or Pam. Alas, we’ll never know for certain, and so Helen or Cindy or Pam has been lost to history.

Now, while the wine-mom meme may be a relatively recent phenomenon, the archetype has existed since antiquity, or at least since the 1950s. (We don’t have memes to document this, but we do have I Love Lucy.) Since then we have seen it take many forms, including but not limited to the manipulative matriarch Lucille Bluth on Arrested Development, the icy-hearted queen mother Cersei Lannister on Game of Thrones, and the happy-go-lucky housewife/cook Linda Belcher on Bob’s Burgers. But it wasn’t until the genesis of Facebook groups like Moms Who Need Wine in 2009 (with 700,000 followers as of now) that wine moms began to assemble, to organize, to evolve.

It was around this time that capitalism got its hands on wine-mom culture. Books (like Mommy Mixology and Reasons Mommy Drinks) were being written. Mom-specific wine labels (ex. MommyJuice Wines) were emerging. Merchandise was becoming available, including tank tops and tote bags. This makes sense; according to a Gallup poll in 2012, 52 percent of women preferred wine above all other forms of alcohol, a statistic that jumped to 59 percent when the women were over the age of 50.

The earliest known use of the phrase “wine mom” on Twitter was also sometime in 2012, though usage was, at that time, few and far between. And in 2015? Well, in 2015 wine-mom culture experienced a veritable renaissance, and by 2016 the overarching meme itself — the very wine-mom identity, the energy, the essence — exploded onto the scene in a burst of Amy Schumer GIFs captioned “It’s 5 o’clock somewhere!”

Young people suddenly wished to embody the world-weary yet jaunty sense of self unique to the wine-drinking mom.

Where once there was a trickle of tweets (think one or two per year), suddenly there was a tsunami (think dozens of tweets every hour). Quizzes were appearing. Listicles became commonplace. All at once, wine moms were seen not as a middle-aged and out-of-touch populace recycling archaic jokes on a social media platform that millennials had long abandoned; now they were viewed with a fondness, almost a yearning. Young people suddenly wished to embody the world-weary yet jaunty sense of self unique to the wine-drinking mom who could be found most nights posting outdated yet earnest memes and responding to others in kind (“LOL! Good one, Barbara!”).

Just look at how often people were searching for “wine mom meme” on Google.

As with most trends, the inevitable backlash was not far behind. Wine mom culture, it turns out, is deeply troublesome; it normalizes alcoholism; moms do not need wine to cope with the rigors of parenting, they need affordable access to mental-health services. These are all valid (and extremely necessary!) points that have done little to stem the flow of tweets proclaiming oneself to be “a vodka aunt in a wine mom world.”

If anything, the negative response to wine-mom culture underscores just how prevalent the phenomenon has become, and how interwoven it now is in the very fabric of our society — how what was once a rare colloquialism has become part of the milieu.

And it is indicative of the vice moms find themselves in: childcare in many states costs almost as much as a college education, per the Economic Policy Institute; mothers face outright discrimination in the workplace, with 31,000 reports of maternity discrimination lodged in the U.S. in over a roughly four-year period to 2015; mothers in 2012 spent an average of an hour longer with their children each day than mothers in 1965, per Quartz. We may or may not be headed into a recession in the U.S. No wonder a simple rallying cry for parents — "it's whine o'clock, baby" — has so many applications, regardless of whether or not drinking is involved.

Love it or hate it, there is no doubt that the wine mom meme has struck a chord. Unlike other memes that are a flash in the pan — here one day, gone the next — wine mom is a decades-strong phenomenon that has inexplicably endured.

In fact, when the sun swallows the earth and civilizations turn to ash, I’m certain all that will remain will be a meme proclaiming tonight's forecast to be a "99 percent chance of wine!" posted by a middle-aged mom named Sharon.