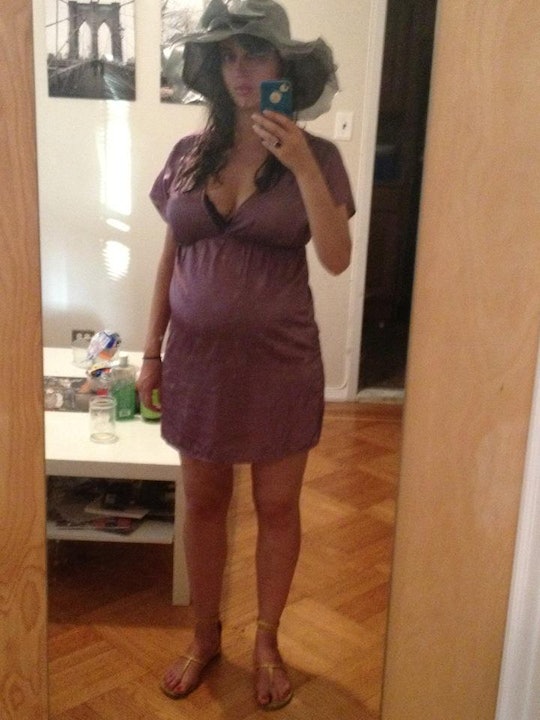 A Stranger Grabbed Me While I Was Pregnant & It Was Horrifying

It was a Sunday in August, and I was eight months pregnant. I don’t know if you’ve ever been eight months pregnant in August, in New York City, but it’s a lot. My city, bless its heart, is a pedestrian city, which made it basically impossible to stay off my puffed-up feet, and the humidity just hung in the air between the walls of the concrete jungle. I was sweaty and swollen. So that day, I opted for a short lavender dress. I’d been at a rehearsal, or a meeting, or a show; something that had brought me to the Union Square area. It was around 6 p.m. — still daylight out. Union Square, if you don’t know, is an incredibly populous subway station. It’s got seven different subway lines and it’s pretty central. So I did not expect, as I climbed a flight of stairs, that someone would choose this time and place to reach under my dress and grab my ass.

As it happened, I was so confused. I wondered if it was the guy I was sorta-seeing at the time, but actually, he’d hit “pause” on us not long ago, so that wouldn’t make sense. I wondered if it was a friend of mine, but which one of my friends would have reached under my dress? I turned to see who was behind me. It was a stranger. He looked like any New Yorker: hair half-pulled back, and incredibly kind, intelligent eyes. “Excuse me,” he said, and kept walking. I walked after him. “No,” I said, “I can’t excuse you. You just stuck your hand up my dress.” “Excuse me,” he said again. “You just f*cking groped me,” I yelled.

“Excuse me.” That was all he said: “Excuse me, excuse me,” over and over. And he kept walking away. 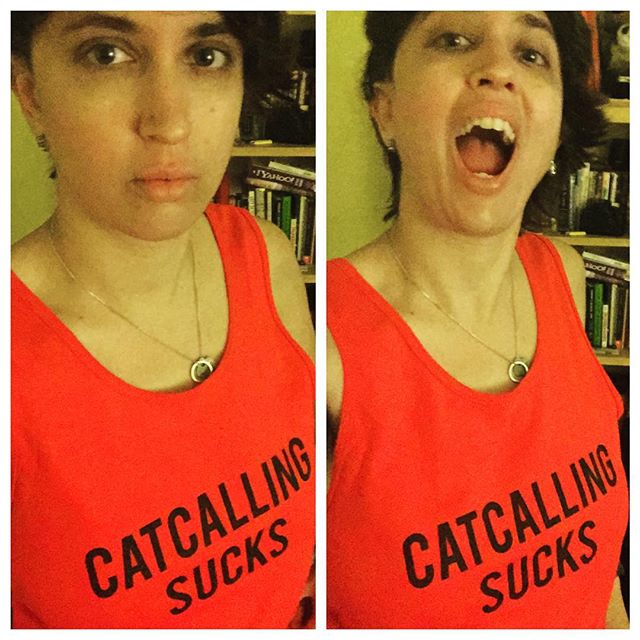 His bizarre tactic started to work on me. Was I sure he hadn’t just tripped and landed with his hand up my dress? (Yes, I was sure; it had been a very deliberate squeeze, but in the moment I started to doubt myself.) I started to feel incredibly alone in this subway station, where I was yelling at a stranger for groping me and no one was stopping to help. I started to feel self-conscious about the fact that I was a white woman yelling at a black man in public. Was I sure I wasn’t just profiling him? How could I doubt someone with such kind eyes?

I couldn't reconcile it, but something felt extra wrong about the hugeness of my belly while being publicly violated. Maybe because we want to shield our children from such things, or want them to come into the world “pure.” Or maybe just because, who the hell does that?! What could possibly have been going through the head of a man who publicly molests an eight-months-pregnant woman?!

I could hear my train pulling in downstairs. The subways on weekends run a lot less often than during the week, so I had a choice: get on my train now and get away from this increasingly horrifying situation; or stay to report him, risking him getting on his train before I could even find anyone to report it to, and whatever bureaucratic or victim-blaming bullsh*t I might run into with the police.

I got on the train. And I regretted it immediately.

When I got home, I called the police to report it and was told, “We don't take reports over the phone. You have to meet with a police officer in person.” I laughed at him and hung up, disgusted with a system that would make it so difficult for an assaulted woman to take action. I didn’t remember what the man was wearing, so I was pretty positive that my description of him would be useless, and I wasn’t about to ride another 45 minutes back to Union Square to waste my time or that of the NYPD. (In retrospect, it's possible that maybe there would have been security camera footage, but surprise, surprise, my infuriated and violated brain didn't think of that.)

I felt so utterly depressed that we were all assuming there’d be a “next time.”

When I posted about it on Facebook, a number of my friends responded, “Who the hell gropes a pregnant woman?!” which had been my feeling as well, until I thought, “Wait, so it’s more justifiable if the woman’s not pregnant?!” I couldn't reconcile it, but something felt extra wrong about the hugeness of my belly while being publicly violated. Maybe because we want to shield our children from such things, or want them to come into the world “pure.” Or maybe just because, who the hell does that?! What could possibly have been going through the head of a man who publicly molests an eight-months-pregnant woman?!

Lots of people offered suggestions: “You should’ve kicked him in the balls,” “I would have maced his ass,” “Next time tell a conductor,” “Next time take a video with your phone,” “Next time ask a passerby for help,” all of which was extremely well-intentioned and just made me feel smaller and smaller for not having done the “right” thing. And I felt so utterly depressed that we were all assuming there’d be a “next time.”

Then I found myself thinking, “Well, if my dress hadn’t been so short, he wouldn’t have been able to get his hand up there.” And then I thought, Wait, am I f*cking kidding myself?! Did I seriously just slut-shame myself for getting groped in Union Square in broad daylight? If I could’ve grabbed myself by the shoulders and shaken myself, I would have. Instead, I just got angrier and angrier at the whole thing.

My pregnancy journey had a million beautiful moments of solidarity and community. A baby shower in the back room of a bar, where my loved ones sang songs and read poems to me on a tiny stage. A team of my friends accompanying me to the hospital for my son’s birth and tending to me in shifts. The strangers who bought cheeseburgers for me and my best friend when they found out I was pregnant. But this wasn’t one of those moments. This was a moment when I felt invisible, and no one stopped what they were doing to take care of the pregnant lady. And after the fact, there was nothing I could do about it. I couldn't guarantee that I'd never be in the same situation again, because I couldn't stop taking public transportation. I couldn't cover my body in the August heat without burning up. I couldn't "be more careful," because it had happened in a well-populated subway station in broad daylight. Sometimes, you get groped in public and there is simply nothing you can do about it.