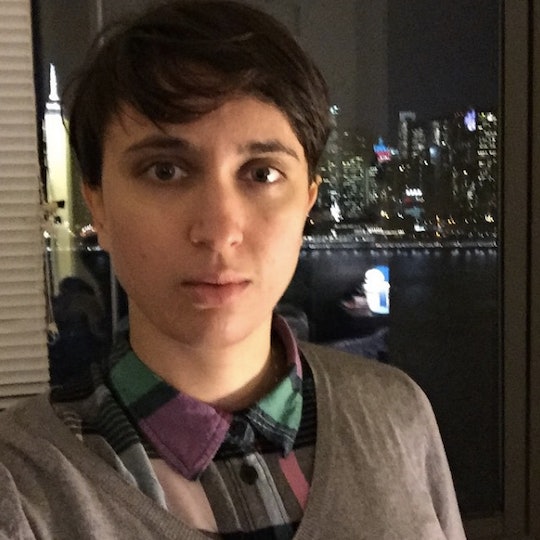 I Got Dumped During My Third Trimester

I'm sitting in the corner of a Bryant Park-area bar, and I don't know that I'm about to get dumped. I'm drinking water, because I am pregnant. It's my third trimester. My date, Irving, is sitting across from me. He's had three whiskey gingers in the last hour, which means he's somewhere between buzzed and drunk right now. We haven't been dating that long, but we've had some delightfully intense third-trimester sex on multiple occasions, and he's felt my baby kicking him while spooning. I’m planning to place the baby for adoption, so there’s no hovering question of whether I’m recruiting him to be a daddy; we’re just having fun. I like him. He likes me. I can tell this much. He’s kind and awkward and makes movies. He smells amazing. So here we are, at a bar together, and I have no idea I'm about to get dumped.

We've been sitting at the counter, and then he said, “Can I talk to you?” even though I'd thought that's what we'd been doing, and then we moved to a more private corner of the bar. I'm pretty sure I know what's coming: He's about to tell me how much he likes me. He's conflicted about it, sure, because my body is inhabited by another human right now, but he clearly is super into me, and that's why he wanted to come to this secluded corner of the bar.

“I really enjoy talking to you and hanging out with you,” he continues.

Finally I ask, “Am I coming over?” and he says that as much as he’d love to have me, he has “stuff to do” or something.

Then, he babbles. About the intimacy of it, and his intimacy issues, and how freaked out he got when he felt the baby kicking, and how we'd be having sex left and right if I weren’t “having another man’s baby,” but I am, and...

And I think, how do I get him not to break up with me? And then I think, Oh God, he's gonna know I'm trying to keep him from breaking up with me. How do I do this without him noticing what I'm doing?

So we skirt the issue for about an hour. I am too afraid to say, "Does this mean you’re out?” because I don’t want him to say yes. We talk about how we both really enjoy sex with each other. We talk about how my body is puffed up and fragile at the moment and can’t sustain that much ugly-bumping right now. We talk about the impending deadline of my son’s birth, after which my crotch will become a no-fly zone for a while anyway.

And then finally he says, “Do you want to go have sex in my office?”

I am very much on board. But I also very much notice that he doesn’t hold my hand on the way there, even though he held it earlier that night. I am 100 percent positive that we're going to his office because it’s less intimate than sex in a bed, and that this is the last time it’s going to happen.

I hate that my reproductive status is keeping me from pursuing a really lovely connection. I feel like he's judging me for being pregnant and I hate that too.

Irving doesn’t say anything. Finally I ask, “Am I coming over?” and he says that as much as he’d love to have me, he has “stuff to do” or something. We kiss goodbye outside the subway, and it goes on for a while, but he eventually breaks away. “Well, I could keep doing this all night, but…”

I want to say, “Then why don’t you?” but instead I walk away.

Because fellow birth mothers being hard to come by, I hate that this experience has turned into yet another way for me to feel alienated and alone.

I am morose AF. I blink back tears on the subway ride home. The only good thing is that my roommate is out of town, so I can sleep in her air-conditioned room, this being August and me being too broke to afford an AC of my own. I flop down in her cool, cool bed and write a song about my feelings (called “Feeling Things for Two,” with lines like, “Your bed’s not built for three”). And then, just to be sure, I Facebook message him about it:

“So I acknowledge that writing this message may have the opposite effect of what I want, but I have to say this. I like you. I like having sex with you. I felt sad after saying goodbye to you yesterday because I had the feeling from our conversation that we weren't going to go out again. I hope that's not actually the case, but if it is, please just be up front with me.

It seems like it would be a shame for two people who like each other and like getting it on with each other to miss out on that, weirdness and all. I have fun with you. I’d like to keep having fun right now. Even if the intimacy is scary.

I really, really appreciate you speaking up last night. Thank you for being real with me.”

He writes back, kindly saying that he doesn’t want the intimacy of third-trimester sex to cloud the reality of our feelings for each other… but that whenever I’m ready to date again after giving birth, I know where to find him.

And... this destroys me a little bit. I hate that my reproductive status is keeping me from pursuing a really lovely connection. I feel like he's judging me for being pregnant and I hate that too. And, because fellow birth mothers being hard to come by, I hate that this experience has turned into yet another way for me to feel alienated and alone.

But in this moment, not knowing any of that, frustrated and broke and unloved in New York City, I just feel sorry for myself.

More Like This
A C-Section Actually Doesn't Take As Long As You Think, According To Experts
43 Instagram Captions For National Brother’s Day That Say It All
Say What's In Your Heart With These Stepmother's Day Quotes
Stepmom Quotes & Sayings For Every Occasion