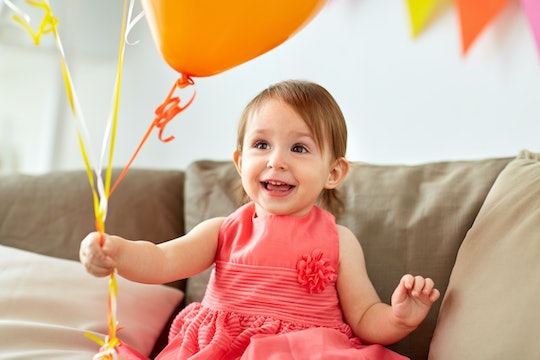 When You Hear How Surprises Affect Your Kid's Brain, You'll Want To Do More Of Them

If you were lucky enough to have had the chance to prank the kids this April Fool's Day, you may have seen some really surprised faces. As a self-proclaimed psychology nerd, I often wonder what happens inside the brain during certain events. But when it comes to being surprised, it almost feels like your whole body responds, not just your brain. So, if you've ever wondered what happens to your kid's brain when they're surprised, here's what actually happens on a neurological level, according to experts. I checked in with experts Dr. Sean Paul of Now Psych, and educational and developmental psychologist, learning specialist, and the assistant director of the Center for Student Success at Beacon College in Leesburg, Florida, Dr. Oksana Hagerty, to see what goes on inside those little minds when they're met with a surprise.

Does your child love to watch those egg opening videos on YouTube? Kids can sit and watch those for hours. Well, there might be a good reason for their obsession. Dr. Paul says that "MRI studies have shown that the nucleus accumbens (which plays a central role in the pleasure-reward circuit) is activated during pleasurable activities, but is activated even more strongly from being pleasantly surprised. This means we feel more intense happiness and pleasure from a pleasant surprise than we do about an expected pleasant experience." No wonder kids love watching those unwrapping videos so much. It's like they're getting a surprise, so of course they'll want more (and more and more) of that, and who could blame them.

But not only do our kids get a stronger pleasurable response from an unexpected surprise, they're also likely to remember it longer. Dr. Paul says, "[kids] have a stronger emotional response to [pleasurable surprises] but their memories of surprises are often longer-lasting and more vivid." Remember all those epic Christmas mornings? Or another sweet surprise your parents pulled off for you as a kid? Those memories are not only more intense, but they last for years, if not a lifetime. To this day, I still remember waking up on my 5th birthday to my entire kitchen being decorated with pictures and party decorations for my Little Mermaid birthday party.

But not all surprises are joyful surprises. Sometimes a surprise can cause us to have a negative reaction such as fright. "When we are scared, we usually engage in two types of responses: fight or flight (some add a third one — freeze)," Hagerty says. "That is why fear (flight) and aggression (fight) are often called emotions of distance (you want the event out of your life — either by running away from it or by actively pushing it out)." Anyone who has visited a Six Flags Great Adventure for Fright Fest knows this fight or flight response all too well.

But as we get older, surprises good or bad become more difficult to achieve. This is because as you get older, "you learn to read into cues and clues that a child may not notice. Also, we become more suspicious and cautious about the unknown as we grow up," says Dr. Paul. But the good news is, Dr. Paul points out, that "the effect of a surprise, if the person is truly surprised, remains intact at all ages."