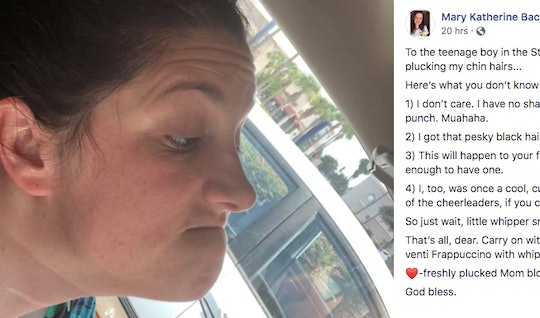 Getting older and becoming a parent is awesome for so many reasons, but there are some things that no one can really prepare for, like some itty bitty chin hairs that may appear one day. Yes, ladies — it's a real thing and we're all in this battle together. While some may choose to embrace them, others may pluck, wax, or laser those suckers away. It's a reality not everyone may be aware of, like one teenage boy who filmed this mom plucking her chin hairs while she was in the car. But, honestly, her response to the whole moment was pretty amazing.

Mary Katherine Backstrom, a prominent blogger tackling all things motherhood at Mom Babble, went viral after posting about a teen snapping a photo of her plucking a chin hair in a Starbucks parking lot. In a Facebook post that's been shared thousands of times, Backstrom penned a message to the teen, writing: "To the teenage boy in the Starbucks parking lot who just recorded me plucking my chin hairs...Here’s what you don’t know... I don't care. I have no shame. And sorry, but I beat your upload to the punch." (And don't worry fellow mamas, as she shared on Facebook, she "got that pesky black hair.")

Backstrom went on to inform the teen that "this will happen to your future baby mama if you’re ever blessed enough to have one," adding "I, too, was once a cool, cute, awesome, little high school kid. Captain of the cheerleaders, if you can believe it. Oh, yah. Shake it shake it."

"So just wait, little whipper snapper. Just wait. That’s all, dear. Carry on with your Fortnite playing self and enjoy that venti Frappuccino with whip while your metabolism still likes you," she concluded her post, signing off as "freshly plucked Mom blogger with zero shames."

Backstrom tells Romper that sharing the post was "liberating" for her. "I don't know anymore if I post crazy things like this because I have an immense amount of confidence, or an unhealthy lack of shame. Either way, it's a very liberating way to live my life, and I think more people should give it a shot," she says. "Turns out, when you share the most ridiculous parts of yourself out in the open, you find your people."

She admits her only goal in posting the photo was to "beat that kid to the punch," though I think she unknowingly empowered a lot of women everywhere by sharing it. And it's clear from the comments on her Facebook post that a lot of women have been in similar situations and were grateful to stand in solidarity with Backstrom.

"OMG! I had a similar thing happen... I was in my car and some teen driving his daddy's Cadillac SUV yells out.. 'nice beard tweezing' ... [I] just rolled my eyes and kept tweezing. Had the very thought..," one p shared.

"I have car tweezers, desk tweezers and house tweezers," another wrote. "You never know when you'll see one."

"So, apparently everyone has 'goat hairs' (their words — not mine!) and there is a pretty strong consensus that cars are the best place to pluck them," Backstrom tells Romper of the response she's received to her post. "In fact, my followers are all pretty convinced our hairs hide until we get out of the house. Having a pair of car tweezers is a thing, people!"

Backstrom's post touches on a subject that's long been talked about online: the culture of folks snapping photos or videos of people without permission to then shame them online. For starters, it's never cool to take pictures or video of people without asking. And Backstrom agrees.

"I think it stinks, and I don't think it's going anywhere," she tells Romper. "Everyone is the paparazzi now, and we treat other human beings like they are subjects to document for entertainment, and not people with feelings of shame, embarrassment, and hurt. I am not gonna lie, I am careful to scratch my nose these days! I'd be scared to death the next viral post would be 'popular Mom Blogger caught eating boogers in her van!'"

Such situations aren't uncommon, especially for moms out in public. In 2017, for example, a woman named Molly Lensing went viral after a guy snapped a photo of her looking at her phone while her baby lay on a cloth on the floor in a Colorado airport, according to TODAY. He posted the photo on Facebook, with a quote he falsely attributed to Albert Einstein, "Albert Einstein said, 'I fear the day that technology will take on our humanity... the world will be populated by a generation of idiots.'" The post was shared more than 65,000 times and received more than 2,000 comments.

While many of the comments were defending Lensing, some were seriously harsh. Lensing told TODAY what was really going on in the photo, which explained a lot more than the judgmental Facebook post let on. "We had the unfortunate luck of being stuck in the middle of the Delta computer shut-down," she told TODAY, noting that they were in the airport for more than 20 hours together.

No matter the situation, it's never cool to try and make someone look bad or put them on blast online. Moms go through enough on a daily basis without worrying about being tried in the court of public opinion. As I think we all learned in elementary school, if you don't have anything nice to say, don't say anything at all. Or, as Backstrom suggests, embrace your car tweezers.