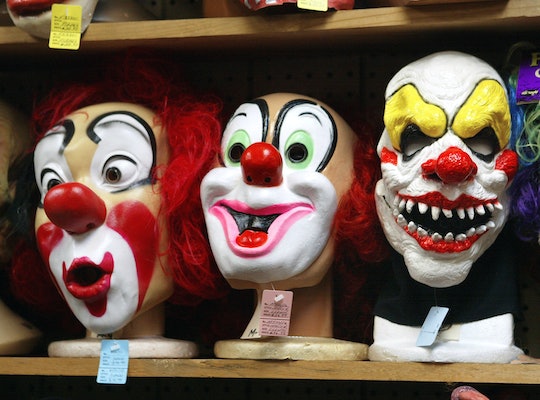 A Timeline Of Clown Sightings, Because The Situation Has Gotten Bizarre

At first, it sounded like a joke. Or maybe a Halloween-themed movie of the week from the '80s. A creepy clown trying to lure children into the woods. Or a menacing looking clown standing at the roadside, staring blankly at cars as they passed. All we needed was a sassy heroine and a manly chief of police to investigate. Except the sightings keep on happening and there is no sassy heroine in sight. You need to look at a timeline of clown sightings to fully comprehend how bizarre the situation has gotten. I must remind you all, we have not included sightings of regular old birthday party clowns, circus clowns, or vaudeville clowns (if they still exist). Let's not tarnish the entire clown community with the same brush, right?

These clown sightings have been hotly debated and across-the-board disturbing. Some people have taken to social media to declare the whole thing a hoax (and in some cases, the clown sightings were, indeed, hoaxes), while others worried that there was suddenly an epidemic of creepy clowns trying to lure children away from the safety of their parents and schools. The news has been so inundated with clown sightings across the country that The Telegraph recently reported a new phenomenon: clown hunting. Mobs of people taking to the streets to "hunt" clowns. Before you decide to do any clown hunting though... here's a quick rundown of the clown sightings.

The first clown sighting happened on Aug. 29 in Greenville, South Carolina outside an apartment complex. A little boy reported to his mother that two clowns approached him, one wearing a red wig and the other with a black star on his face. The boy's mother, Donna Arnold, told The Guardian:

“They were trying to lure him to the house.”

Since the first report, there have been eight more clown sightings in Greenville.

David Wayne Armstrong reported to police that he had seen a clown trying to lure children away. He was arrested on Sept. 9 for filing a false police report; the whole thing was a hoax.

Local police authorities reported that two brothers were chased from their bus stop by men in clown costumes.

Several children told police they had seen clowns in the Annapolis area, but later admitted they invented the story.

A 12-year-old is reportedly chased through a park by a clown.

A woman claims that she and her dogs were frightened by two "killer clowns" when she was out for her walk.

A group of clowns were reportedly in the Brentwood area, terrorizing motorists by jumping in front of cars.

"Ain't Clownin' Around," a Facebook account, threatened students in the Houston area, leaving three schools on high alert. One of their threatening posts reportedly read, "We will be at all High schools this Friday to either kidnap students or kill teachers going to they cars..."

Police have asked residents not to join the search for recently reported clowns in the Nampa area.

With Halloween just around the corner, my best advice would be this: don't go trick-or-treating as a clown. The whole country is clearly spooked.