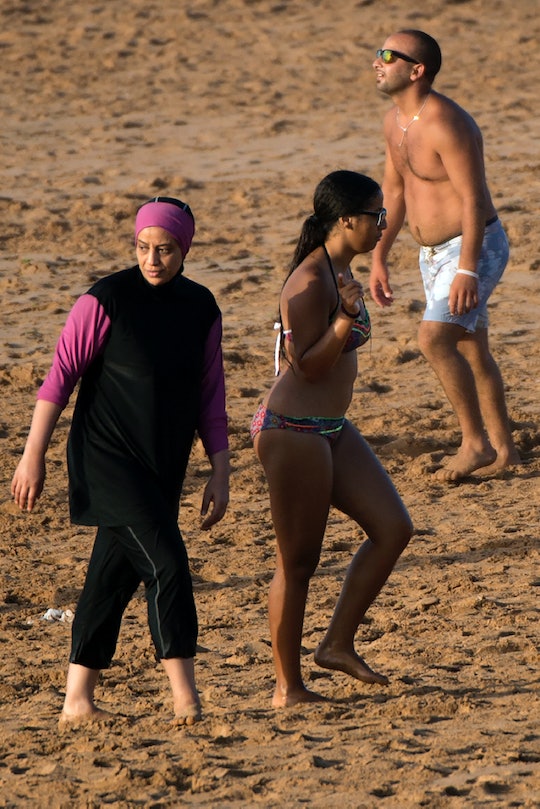 A Top French Court Has Suspended The Burkini Ban, & People Are Psyched

It looks like the people are finally being heard in France. After a terrorist attack in Nice led to some coastal resort towns in the south of France to ban the burkini (a full body outfit designed to help Muslim women keep with religious tradition while enjoying the beach), a new decision has been announced. A top French court has suspended the burkini ban, and people are pretty pumped about the decision.

The decision to ban the burkini came about after a terrorist attack in Nice that killed 86 people and wounded hundreds more. A white cargo truck, driven by an Islamic radical, went careening through the Promenade des Anglaise on Bastille Day in July, a national day of celebration in France, aiming for people on the street. It was a devastating attack, and the country is still trying to find ways to recover. One of those ways, banning the burkini and taking away a woman's right to wear what she wants on the beach, has been the target of worldwide outrage. And now, one of the highest courts in France, the Conseil D'Etat, has ruled the burkini ban is, "seriously and clearly illegally breached fundamental freedoms to come and go, freedom of beliefs and individual freedom."

W‌hile the ruling technically only applies to one of the towns that has been imposing the ban, Villeneuve-Loubet (a small village near Nice), a precedent might now have been set. The case was brought to the court by a human-rights group, the Human Rights League, and the judgment is considered temporary pending a definitive ruling.

Patrice Spinosi, the lawyer representing the Human Rights League, told reporters that he expects this temporary ruling to set a precedent. He recommended that other mayors in nearby towns like Nice and Cannes should conform to the ruling, and noted that any women who have incurred fines for wearing burkinis on the beach should be able to protest those fines after Friday's ruling, according to The New York Post.

There is one mayor, however, who does not plan on conforming to the ruling and lifting the ban. Ange-Pierre Vivoni, the mayor of Sisco (a seaside resort town on the island of Corsica) told BFM-TV:

“Here the tension is very, very, very strong and I won’t withdraw it."

While the bans never actually used the word "burkini," they did refer to “beachwear which ostentatiously displays religious affiliation,” according to The Guardian. The Human Rights League argued in court that the ban was infringing on basic rights and freedoms, as well as igniting fear and hatred of Muslims.

Since the ban came into effect in July, the creator of the burkini, Australian designer Aheda Zanetti, reports that sales of her garments have skyrocketed with Muslim and non-Muslim women alike. As Zanetti said in an op-ed piece for The Guardian:

I created the burkini to give women freedom, not to take it away.

Now it looks as though the path has been laid to restore that freedom. How sweet it is. ‌