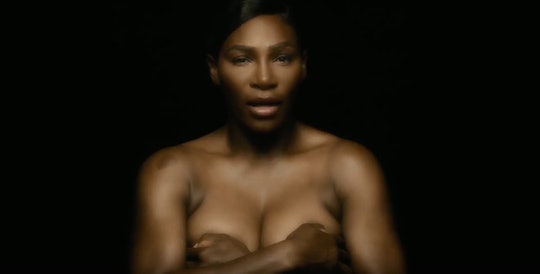 In just a couple of days, it will be October — and Breast Cancer Awareness Month will officially be underway. Inevitably, with it comes an abundance of pink gear during professional sporting events, pink merchandise everywhere you turn, and organized walks/fundraisers in order to raise money to fight this deadly disease. Not only are people encouraged to financially support the breast cancer awareness, women are also reminded to take preventative measures both at home and by scheduling screening procedures in order to catch the disease early. That's why a topless Serena Williams sang "I Touch Myself" to bring even more attention to this important cause.

On Saturday, Sept. 29, a music video featuring the tennis star was released by the I Touch Myself Project, E! Online reported. The project was created in 2014, according to the website, and was inspired by the lead singer of Divinyls, Chrissy Amphlett, who died from breast cancer in 2013. The women's lingerie brand Berlei is also supporting the project, according to People; in fact, Berlei has released a rock-star inspired bra called The Chrissy which has the words, "I Touch Myself" printed inside. Even better? One hundred percent of the profits from this bra will support Breast Cancer Network Australia.

On Saturday, Williams shared a clip of her "I Touch Myself" video via Instagram, along with a message to her followers about why she decided to take part in the project.

"This Breast Cancer Awareness Month I’ve recorded a version of The Divinyls global hit 'I Touch Myself' to remind women to self-check regularly," she captioned the post. "Yes, this put me out of my comfort zone, but I wanted to do it because it’s an issue that affects all women of all colors, all around the world. Early detection is key — it saves so many lives. I just hope this helps to remind women of that."

I think it's safe to say that Williams' fans loved her even more after watching the video. (If that's possible.) One Instagram follower wrote, "I admire your strength and courage. You are a wonderful mother and an inspiration."

Another person commented, "OMG you are amazing — is there anything you don’t do to perfection?!!!!"

Yet another Instagram user wrote, "Wow all I can say is so powerful I don’t have words. Sent chills throughout my body. Thanks."

Seriously, though. Isn't this music video powerful AF? If you're like me, then you were probably sitting there thinking, "Wait, is that Serena Williams' actual voice? Or is she just lip syncing while grabbing her boobs?" (Because she can't be a tennis legend and a talented singer, right? That would just be too unfair.) As it turns out, the tennis pro definitely has some chops of her own! Williams apparently worked with a vocal coach for the video, according to E! Online. And, fun fact: This isn't even her first time dabbling in music. She recorded rap tracks back in 2011, and also appeared in Beyoncé's music video for "Sorry," which is pretty fierce.

For those who want to get in on the awareness action, the I Touch Myself Project invites you to make a pledge to take your breast health in your hands. Simply snap a picture that shows you holding your breasts. (Don't worry, doing it over your clothing is just fine!) Then, share the photo on social media, along with the hashtag #ITouchMyselfProject. And viola!

At the very least, though, consider giving yourself a self breast exam. And be sure to schedule that yearly checkup with your OBGYN and/or get that mammogram (if you're over 40 or are at a higher risk, advised Cancer.org). It's a fact: Early detection can literally mean the difference between life and death.