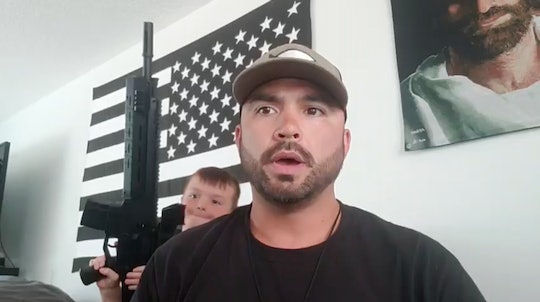 Whether you're in favor of stricter gun laws, or point to the Second Amendment as evidence that the right to bear arms needs to be upheld, I think everyone can agree that guns and children don't mix. Unfortunately, not everyone feels that way, apparently. A U.S. senate candidate let his young son play with a rifle in a chilling Facebook Live video, and Twitter had some *feelings* about it.

The man in the video is Joey Gibson, a senatorial candidate whose platform is built on a concept of "freedom first," according to his official website. Along with being a supporter of the Second Amendment, his other listed causes include "individual rights," "fair tax," "term limits," and more. However, the video that he posted to Facebook Live drew more attention to his parenting style than his political beliefs.

In the campaign video posted last week — which is only one of two such videos that he has posted — Gibson can be seen with his young son, Taylor, who is holding a large gun. Gibson explains that it is Taylor's "first gun" and he is "very excited" to have it. Though it's unclear exactly what kind of gun Taylor is holding, it appears to be some sort of a rifle. While Gibson's campaign website makes it clear that he is in favor of bearing arms, suffice it to say that the voices of Twitter were a bit shocked to see him so cavalier about letting his son play with something so dangerous.

A cropped version of the ten-minute-long Facebook Live video was posted to Twitter by the news outlet NowThis. Reactions to the video came from both sides of the political spectrum, but one thing was clear: people were shocked. Many worried that Gibson wasn't properly securing his guns at home, which Project Safe Child lists as an important step in minimizing risk of accidents. As one person put it, "Totally irresponsible. This is child endangerment. I pray his guns are locked up at his home, because this is an accident waiting to happen."

There was another serious concern in the comments: where Taylor was placing his finger. As many of the tweets pointed out, the child repeatedly fingers the trigger in the video, something that breaks at least two of the Marine Corps' Four Rules of Gun Safety, created to prevent accidents and commonly accepted as guidelines for Fourth Amendment advocates. Not only does he fail to "treat every weapon as if it is loaded," which is Rule 1, but he also does not follow Rule 3 and "keep [his] finger straight and off the trigger until [he is] ready to fire." Instead, he points the gun up and moves his finger on and off of the trigger numerous times. Maybe Gibson and his family should watch the End Family Fire campaign video.

Want to bet that "Captain second amendment" didn't prove that rifle safe before he handed it to his kid? It has a magazine loaded into it and Junior put his finger on the trigger at least three times. There will be an accidental shooting death in that house someday, guaranteed.

Gibson isn't alone in his decision to have both children and guns. Healthy Children reported that roughly a third of all Americans with children have guns in their homes, and almost 2 million children live in homes with unlocked, loaded guns. These are simply accidents waiting to happen. There have been at least 180 accidental shootings involving children in the U.S. in 2018 alone, according to Everytown for Gun Safety. The American Academy of Pediatrics (AAP) stated that "the most effective way to prevent unintentional gun injuries, suicide and homicide to children and adolescents, research shows, is the absence of guns from homes and communities," but that doesn't mean that families are going to go without.

Along with safely securing your own firearms, Healthy Children recommends that parents always ask if there are guns in the homes where your children play. "Just as you'd ask about pets, allergies, supervision and other safety issues before your child visits another home, add one more important question: 'Is there an unlocked gun in your house?''

Parents can't control what other people choose to do with their weapons, but you can ensure that your child isn't at unnecessary risk. Something makes me think that few of the parents on Twitter will be sending their little ones to Gibson's house for a playdate any time soon.