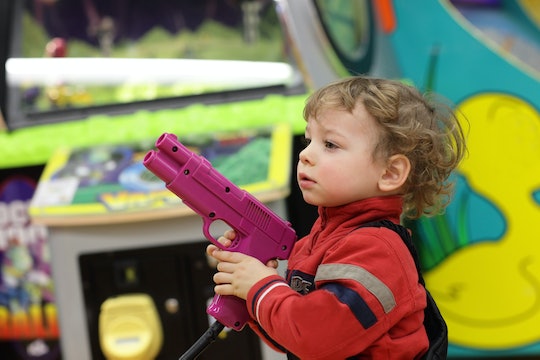 Should You Ask Other Parents If They Have Guns? 8 Moms Reveal How They Do It

Irresponsible gun use is something we have to think long and hard about, especially as parents. It’s our responsibility to do everything we can to keep our kids as safe as possible. For some, that means keeping our kids away from guns entirely. For others, it means teaching children early on to respect guns and, eventually, teaching them proper usage. But what happens when they go to a neighbor’s or classmate’s house, and the parents of that house own a gun? How do moms ask about guns at their kid’s friend’s house without being intrusive, upsetting responsible gun owners, or alienating their children from their friends?

While I am not against gun ownership entirely, I am fully against irresponsible gun ownership. And in my opinion, that includes any gun owner who does not properly store and lock their guns, or anyone who keeps fully-loaded weapons just laying around their home. This goes double for people who have children present. According to a 2017 report by CNN, guns kill nearly 1,300 United States children every year. Parents who believe it's their right to own guns must do a better job of making sure that right doesn't lead to an untimely death.

Kids are curious creatures by nature. If they know a gun is in the house, they'll probably do their damnedest to find it. For the most part, they simply want to see it for themselves or show it off to friends. But there are more than a few moments, as highlighted by the devastating statistic above, when they want to actually use it, either to "play" or show off or intentionally cause harm. Regardless, guns in the hands of children is never a good idea and frequently results in tragedy. That's why I asked moms if and how they ask parents about guns in the homes of their children’s friends, because while these conversations aren't necessarily pleasant, they are necessary. Here's what those moms had to say: