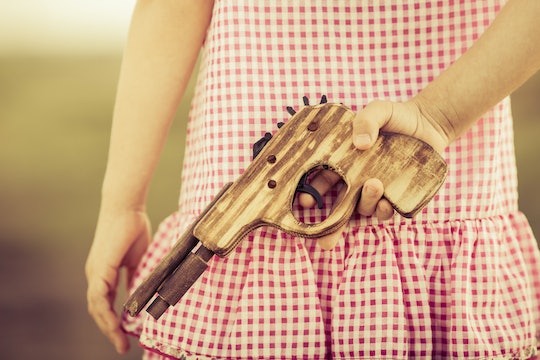 7 Things No One Will Tell You About Kids And Guns, But I Will

With so much talk about guns and gun control in the media, it's understandable that parents might feel especially overwhelmed. As a gun owner though, I feel like the conversation surrounding guns is both misdirected and misunderstood, and as a parent of two boys, it's important that I at least attempt to clear the air. In other words, there are things no one will tell you about kids and guns, but I will.

I am a mother and I own guns. My kids are fine and safe and, really, there's nothing to see here. I can, however, understand why people are so afraid of guns, and why the cry for gun control has never been louder than it is now. With mass shootings, unnecessary slayings of people of color by police officers, cops being killed execution style, and kids being killed by gun shots because their parents don't take their gun ownership seriously, I get it. I really, really do. Guns are scary and in so many situations, sometimes regardless of who is holding them. In fact, although I consider myself pro gun, I support sensible gun control, and I think that every reasonable parent should.

That said, I am living proof that kids and guns can coexist peacefully, responsibly and most importantly, safely. There is such a thing as healthy fear when it comes to guns, and the more parents know about it, the better off their kids will be. So, in the spirit of starting a productive conversation about kids and guns, here are seven things that no one will tell you about them, but I will.