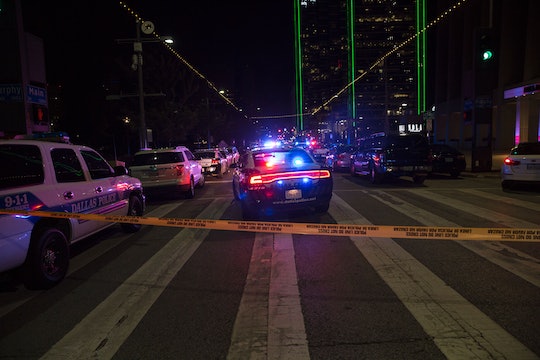 Why Can Civilians Buy Sniper Rifles? The Risks Are Real After Dallas Shooting

The gunman who shot 12 Dallas police officers Thursday night, killing five of them, told law enforcement officials during a standoff that he wanted to kill white officers. He supported black nationalist groups, and had bomb-making materials and a journal of combat tactics in his home. And as an Army veteran who had completed training at a Texas self-defense school that teaches tactics like "shooting on the move" and "drawing under stress," Micah Xavier Johnson was undoubtedly skilled. Although he was ultimately killed during a confrontation with police after his rampage, the Dallas sniper's actions reignite questions of whether gun safety measures could have helped prevent them. Specifically, why can civilians buy sniper rifles, weapons colloquially perceived to be notoriously deadly?

According to ABC news, the Dallas sniper was wielding a "military-style semi-automatic rifle" when he mercilessly fired on law enforcement officials working an otherwise peaceful protest against the police killings of two black men in separate incidents in Louisiana and Minnesota. It's important to note that many rifles can be used as sniper weapons, assuming that they are modified correctly and, of course, that the person taking aim has the skills necessary to carry out an attack like the one Johnson inflicted on Dallas.

The movement to ban similar assault weapons like the AR-15 gains momentum each time the United States experiences another devastating mass shooting. But after the June 12 massacre at a gay nightclub in Orlando left 49 dead and 53 others wounded at the hands of a lone gunman, the U.S. Senate voted down a series of measures introduced that would have improved background check procedures and prevented suspected terrorists from purchasing guns, or made it more difficult for them to do so.

So, with that legislation (which was much, much less drastic that an outright ban of military-style weapons) having failed, rifles like the one the Dallas sniper used to complete what President Obama decried as a "viscous, calculated, and despicable act" are still readily available to civilians in the United States. In fact, Texas does not require someone who owns a rifle to have a state license to do so, according to the NRA.

So, why do law-abiding citizens want to own AR-15s, or others weapons commonly associated with military combat? Writing for Vox, AR-15 owner Jon Stokes maintains that the firearm is the ultimate defense weapon and explains that he appreciates it flexibility and adaptability, among other attributes, like its usefulness in sporting and hunting:

With the AR platform, a person with absolutely no gunsmithing expertise can buy one gun and a bunch of accessories, and optimize that gun for the application at hand. You can even make an AR-15 into a pistol.

Similarly, the individual members of police and military units can tailor the AR to a specific mission without the help of a professional armorer. Barrels can be swapped out, calibers changed, optics added or removed, and the gun can be totally transformed for every type of encounter, from a long-distance sniper shot at a hostage taker to a close-quarters drug raid in a crowded apartment complex.

As Stokes notes, the AR-15 can be adapted to make it effective at sniper shots. When that type of gun, or another military-style weapon, ends up in the hands of someone like Johnson — with dangerous intentions and the skills to make them a reality — that capability can turn deadly. As the nation mourns the five officers killed Thursday night, our lawmakers should continually reexamine gun laws to evaluate why "sniper rifles" are so ubiquitous and accessible here, and what courses of action would best ensure the safety of Americans, both civilians and those sworn to serve and protect.