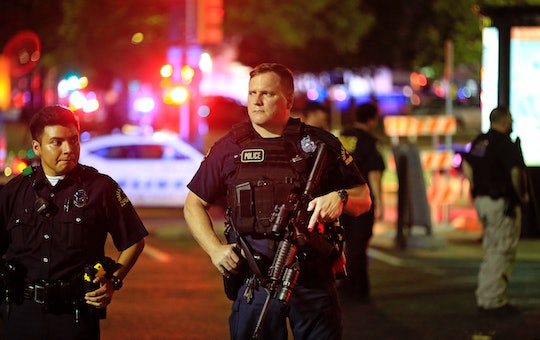 How Easy Is It To Get A Sniper Rifle? They Are Surprisingly Easy To Come By

When shots rang out during a peaceful protest in downtown Dallas, Texas, on Thursday evening, the crowd of nearly 1,000 people scattered. But those people weren't being targeted. The shooters were trained in on the police at the demonstration, and their accuracy resulted in the deaths of five officers and the injuries of six more. The incident is being called the most deadly attack on law enforcement since Sept. 11, 2001, and it's left many wondering, how easy is it to get a sniper rifle? The shooters were well-armed.

According to CNN, 11 law enforcement officers were shot at the protest against police violence. Organizers had planned the gathering to mourn the deaths of Alton Sterling and Philando Castile this week and demand police reform and equality under the law. No connections have been found between the protest organizers and the shooters.

According to NBC News, the shooting was well organized. First, two snipers fired shots around 9.m. Central Time and law enforcement attempted to secure the area while clearing the area of civilians. The Washington Post reported that, following the lockdown of the area, one of the alleged gunmen in a nearby parking garage engaged in a negotiation standoff with a SWAT team, which ended in that suspect's death. Three other suspects were found throughout the downtown area and placed in police custody. President Obama addressed the press on Friday morning, calling the shooting a "viscous, calculated despicable act." The deaths of the five police officers at the hands of sniper-wielding gunmen was a "tremendous tragedy."

But the question remains, how did they get their weapons? It may not be too surprising to learn that acquiring a rifle is not difficult, especially in Texas. The state's gun laws are not strict, and even have loopholes specifically for rifles. While federal law requires weapons dealers to run background checks on every customer, according to Smart Gun Laws, Texas does not require private sellers to conduct the same background checks. Also, according to the NRA website, a state license is not required to possess a rifle in Texas, like the ones used by yesterday's shooters. There are only restrictions placed on someone's firearm possession if they have a prior felony or Class A misdemeanor conviction.

According to Quora.com, any citizen who passes or gets around a background check can purchase a rifle. The term, "sniper rifle" can be a bit misleading. Any rifle, modified with a scope, the proper ammunition, and the proper skills can be used as a sniper weapon. Despite gun restrictions on other assault weapons, rifles remain fairly easy to come by because of their popularity with hunters.

While the number of gun deaths across the country is steadily rising, the Centers for Disease Control reported that every year there are about 3,000 gun-related deaths in Texas alone.