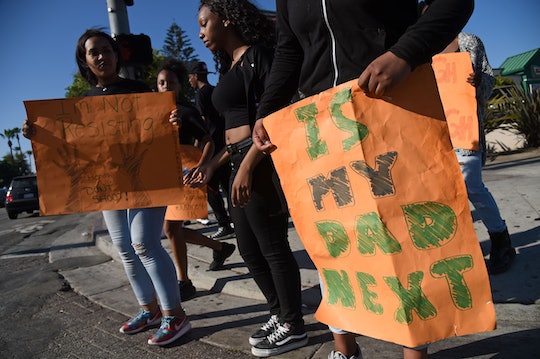 Millions of Americans viewed the painful, visceral cellphone footage of the the last moments of Alton Sterling and Philando Castile, two black men whom police officers shot and killed in separate incidents this week. Shocked and angered by the events in Louisiana and Minnesota that activists have decried as a symptom of overt racism, many reeling communities want answers, justice, and change. Part of that will involve working to assuage the mistrust and fear that exists between law enforcement officials and the Americans of color they've sworn to protect, and it could also mean legislative remedies. Will Congress address the Sterling and Castile shootings?

After a tragedy, Americans often demand change from from their elected officials. It happened, for example, after the June 12 mass shooting in a gay Orlando nightclub that left 49 dead, and the Senate ultimately voted to reject proposed gun safety legislation. And the extrajudicial police killings of black men, women, and even children has ignited a furor for justice since Officer Darren Wilson killed unarmed Michael Brown in Ferguson, Missouri, in 2014 and the Black Lives Matter movement was born. (A grand jury ultimately decided not to charge Wilson with any criminal wrongdoing in Brown's death.)

But, as President Obama noted in a speech Thursday addressing both deaths, Congress is generally gridlocked, and so progress is tough, to say the least.

Despite the roadblocks that undoubtedly lie ahead, some House Democrats called for a congressional hearing Thursday in response to this bloody week, USA Today reported. Rep. Keith Ellison of Minnesota, the state where a police officer shot Castile four times, reportedly when he reached for his license and registration during a routine traffic stop, called the situation a "national crisis."

One of the bills they'd like to vote on would encourage local governments to pass laws mandating that independent prosecutors handle instances of officers using deadly force on civilians (rather than having the police departments where the officers work conduct investigations). Some lawmakers are drafting legislation that would entitle victims and families of people killed by police officers to an independent investigation and autopsy as well.

Rep. Cedric Richmond of Louisiana, the state where Sterling died, explained what he hoped to accomplish during a news conference, according to USA Today:

I’m not sure if legislation comes out [of the effort], but hopefully a hearing will come out where we can talk to law enforcement, victims' families and other experts on how do we start preventing this and how do we better train our law enforcement officers on de-escalation tactics, on all the other alternatives to deadly force.

In addition, Congress could act to improve the system of investigating officer shootings (the departments themselves deal with many of them), and to institute better systems for reprimanding officers who shoot people (various state iterations of the Police Officer's Bill of Rights affords them protections civilians don't have, and many go free). It could also agree to mandate that police departments provide officers with deescalation training or training in psychology, outfit them with body cameras, and provide the funds to do so, but if history is any indicator, it's certainly not a given that that will happen.

In 2014, after Brown's death, Obama asked Congress for $263 million to buy body cameras for 50,000 police officers across the country, a move that could have improved race relations by promoting law enforcement accountability. Months later, House Republicans told him no.

The very real problem of police violence is clearly incredibly complicated, as it encompasses racial prejudice as well as a system that tends to favor cops, and for that reason demands a multi-pronged approach to identify possible solutions. When she posted a statement to her website Thursday about the two deaths, Beyoncé beautifully outlined what society can do. "We don't need sympathy," she wrote. "We need everyone to respect our lives."

The "Freedom" singer ended her letter with a call for fans to "channel [their] frustration and anger into action," by contacting their congresspeople and other legislators. So, click in like Beyoncé said, and urge Congress to institute legislation that will better protect all people and not just some.