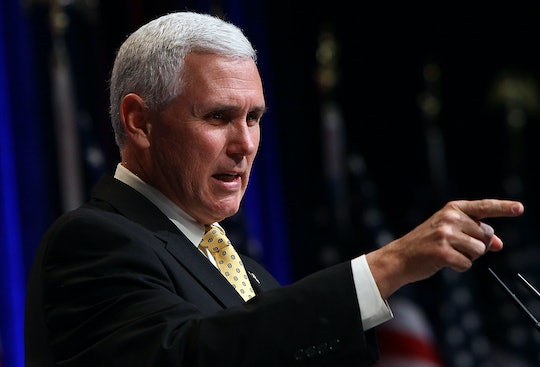 What Are Mike Pence's Views On Gun Control? He Has An 'A' From The NRA

The Republican presidential veepstakes are reportedly drawing to a close, and presumptive nominee Donald Trump's campaign has supposedly indicated he'll name the conservative governor of Indiana as his VP pick in New York Friday morning. Anyone who supports reproductive freedom and equality for LGBT Americans knows this politician's name because of the controversial legislation he's signed into law during his term, but what are Mike Pence's views on gun control? He's voted to protect the gun industry and empower firearms owners in the past, earning him an approving "A" grade from the NRA.

Throughout this 12 years in the House of Representatives before taking office as governor in 2013, Pence consistently displayed a pro-gun voting record. He has maintained his belief that allowing law-abiding Americans access to guns makes the country a safer place, not a more dangerous one. That's ostensibly why he voted in favor of similar measures in 2003 and 2005 that would have banned liability lawsuits against gun manufacturers and dealers when firearms are used criminally — like the one families of the victims of the 2014 Sandy Hook Elementary School shooting have brought. And in 2011 that conviction apparently motivated him to co-sponsor the Firearms Interstate Commerce Reform Act to relax restrictions on interstate gun purchases.

And Pence has continued to tout his pro-gun agenda since embarking on his governorship. In March 2014, he signed into law a bill that many top school officials had urged him to veto because they believed it would threaten the safety of students: to allow adults to store handguns and other firearms in their locked cars while in school parking lots.

"Young people, schools, guns and all of that is a mix for something inappropriate," Indianapolis Public Schools Superintendent Lewis Ferebee told The Indianapolis Star before the governor approved the measure anyhow. Pence said that it would not affect the prevalence of school shootings because potential killers wouldn't worry about following laws, and would bring weapons onto campuses regardless.

I have strongly supported the right to keep and bear arms. I truly believe that firearms in the hands of law abiding citizen's makes our families and our communities more safe, not less safe. And the bill that we just signed here in Indiana really was a common sense reform. We actually have parents that had a permit to conceal and carry a weapon that we're finding themselves guilty of a felony just by dropping their kids off to school. So we just — we made a modest change, a common sense change in Indiana law. And I strongly supported it.

If Trump does, in fact, intend to name Pence his running mate (and all signs indicate that he does), he will have to inform him by Friday, because Pence must withdraw his candidacy to run for reelection as governor before noon that day, CNN reported, in order to hop in the presidential campaign trail. And in his home state may be glad to see him go: His approval rating plummeted from 62 percent at the end of 2014 to 47 percent in late 2015, according to The New York Daily News.

Still, Pence's views on guns are in line with his other hardline conservative gun stances that may make him such an attractive VP pick for Trump in the first place. It could help the presidential candidate reel in social conservatives who approve of Pence's signing into law of a religious freedom bill that initially made it legal for businesses to discriminate against gay customers. They're also likely fans of a measure he signed a year later to greatly restrict abortion access for women in the state (it was later blocked by a federal judge).

While there's still some speculation surrounding whom Trump will name his running mate tomorrow, there is really no question about Mike Pence's views on gun control: He doesn't like it. In fact, him commitment to the Second Amendment has led him to seek more freedoms to those who wish to buy and carry firearms, as well as those who supply them.