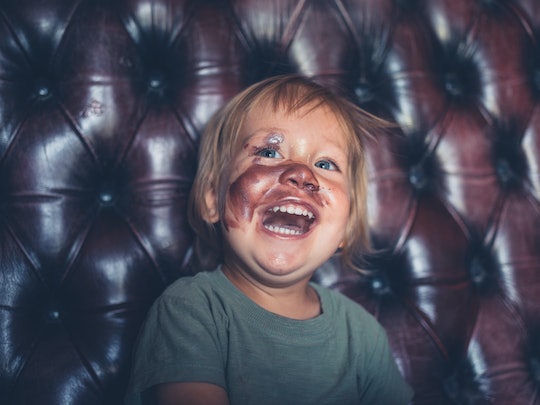 A Warning About The End Of Daylight Savings Time

Once a year, like clockwork (literally), on an otherwise-benign Saturday night in autumn, we fall back one hour. For the childless, it’s a gift. Pre-kids, I loved falling back; it was seriously the best. An extra hour of partying with friends and sleeping? Yes, please! Then I had to go ahead and have kids, and falling back became an exercise in torture. November is here, mamas, and with it, the end of daylight savings time. Consider yourself warned.

When your baby is tiny, daylight savings time is no biggie; the baby isn’t really on a schedule yet and one hour’s time change isn’t going to make a huge difference in his/her round-the-clock feedings, sleepings and poopings. But then your little sprout becomes a toddler—a toddler who no doubt has a pretty regular fall asleep/wake-up time he won’t want to compromise, and he is not apologizing for it. Cut to you, who normally wakes up when your kid does in the semi-acceptable 6:00-6:30 a.m. window, now waking up at 5:00 or 5:30 a.m. Not cool, daylight savings time (DST). Even worse, if you have a truly early riser, who’s naturally up between 5:00 and 5:30, you better get used to waking up in the middle of the goddamn night when DST hits. A 4:30 wakeup sound good? Great, your toddler will pencil that in for the next week or two.

On the first day of DST, an early wake-up is to be expected. You just switched the clocks back and your baby does not know this. You, a grown-ass adult, are not going to magically sleep an hour later on the first day of DST either. But then the first day of DST bleeds into the second, third and fourth, and your precious angel is still going to bed to and waking up an hour earlier than he used to and you’re about to lose your damn mind. I vividly remember my daughter at around 17 months waking up at 5:30 a.m. for two whole weeks before she adjusted to the new time. Given that her normal wake up time was closer to 6:45 a.m., this was a serious blow.

And oh, you can try that whole I’ll-just-put-the-kid-to-bed-an-hour-later-than-usual-and-he’ll-sleep-an-hour-later-riiiiiiigggghhht? thing if you want, but good luck with that. It sounds logical, but it doesn’t work, trust me. Sleep begets sleep, remember? Putting the kid to bed later does not, I repeat, does not, mean your toddler will sleep later. I have had to explain this to my mother more times than I can count.

You are an evil sorceress, Daylight Savings Time. I do not like you.

There are plenty of tips and tricks out there that will allegedly get your baby adjusted to the new time with the greatest of ease. Some experts advise pushing your kid’s bedtime back 15 minutes each night for the four nights leading up to falling back. That way, theoretically, your child will go to bed an hour later than usual the night before DST happens, and will therefore wake up an hour later the next day, which will be the same wake-up time as usual.

I call bullsh*t on this, because see above. Others suggest making your baby lie in bed for 30 extra minutes on the morning after falling back just to buy yourself that extra half an hour. What baby is going to tolerate that B.S.? Plus, here’s the thing: does every baby fall asleep at the exact same time every night? Mine certainly doesn’t. It depends on how late his afternoon nap was, in addition to how chipper he’s feeling in the evening and whether or not his afternoon poop has come yet. So many factors! Pushing his bedtime back by 15 minutes is a semi-regular occurrence in our house, not some special trick that is going to make DST a seamless transition.

Have I put too much thought into this? Probably. Some moms are super chill about when and where their littles nap and sleep. I am no such mom. I like a schedule. I like to know when my 15-month-old is going to be asleep (give or take a half an hour here and there) and I like to know when he wants his milk and his meals, and I don’t want it to vary too much because he is truly the happiest baby on the block and I do not wish to f*ck with this. Daylight Savings Time not only f*cks with this but does it with blithe abandon. You are an evil sorceress, daylight savings time. I do not like you.

So please, this November, think back fondly on your pre-kids life, when you used to relish that extra hour of sleep every fall. It was a beautiful thing. But now, you must kiss it goodbye. All good things must come to an end, right? Daylight savings now means you’ve got a grumpy kid who wakes up at 5 a.m. and can’t adjust to the new time for about two weeks. Commence your coffee intravenous drip now, and enjoy your extra-early mornings, mom!

More Like This
101 Advent Calendar Activities, From Books To Read To Cookies To Bake
20 Stocking Stuffers For Kids Under $20
13 Brilliant Gifts For Kids Obsessed With Music — Especially Singing Very Loudly
30 Great Non-Toy Gift Ideas For Kids