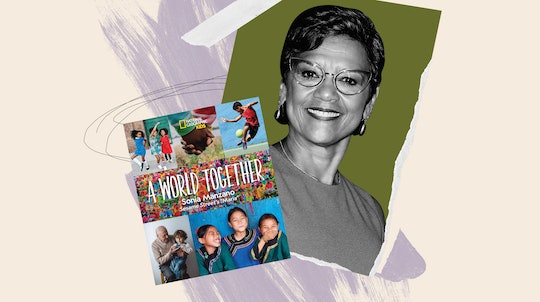 Just when the world could use it most, one Sesame Street actor has brought to life a critical message from the show about the beauty of diversity in an all new book for families, A World Together. Filled with vibrant images of children and families across the globe, the new book is a gorgeous collaboration from National Geographic and Sonia Manzano that not only celebrates diversity, but explores a bevy of human emotion through meaningful prose paired with stunning photographs.

Best known for her role as the beloved character Maria on Sesame Street, the actor and author tells Romper by phone that she had a "terrific time working with the good people of National Geographic," and "jumped at the chance to write a book about diversity.”

"We’re living in such uncertain times now, and problems that I actually thought Sesame Street had solved in 1969 when we came out of the midst of the civil rights movement had already been solved or acknowledged this, but now we find ourselves sort of in the same terrible situation of intolerance," Manzano explains.

To write A World Together, she drew inspiration from her childhood. She recalls looking at photographs of Puerto Rico and hearing her parents speak about being there, despite having not been there herself at that point in time. “When I found any pictures of Puerto Rico, I would pore over them,” she says. “We’ve all caressed photos like we’re going to feel something through them, so I kind of connected to that when I started the process.”

She also wanted to dedicate the book to the kids of Puerto Rico, she says. "So the last photo, [in which] they’re standing in a fountain in Puerto Rico, that was important to me.”

Including examples of city life was also important to Manzano, especially since she herself was raised in the Bronx in New York City. Included in the book is a photo of children joyfully playing in the spray from a fire hydrant — “certainly a city view,” she notes.

Manzano says several photos throughout the book stand out as ones that best exemplify the feeling of connection she hoped to evoke with this work. One photo in particular shows a young boy with his father wearing a military uniform, seemingly kissing him goodbye. The emotion in the photo is palpable.

“I hope that parents look at that photo and discuss it," she says. "I want kids to know that we all feel the same things — hunger, pain, joy. Maybe about different things — I’ll be hungry for pizza, somebody else is hungry for caviar — but it’s still hunger. That’s a way of understanding that we’re all similar.”

'A World Together' by Sonia Manzano
Pyramid Books

Manzano hopes parents can use the book to spark larger conversations with their kids to talk about what they think is going on in the photo and develop empathy instead of dismissing the emotion. She says she remembers feeling "very empowered" as a child when she would feel emotions such as sadness in books — "like I had joined a bigger human experience of adults,” she explains.

As Maria on Sesame Street, Manzano says that she was inspired by the way that the show was always “truthful and sincere” when talking to children, a point she hopes comes across in A World Together.

“I was raised in a household ruled by domestic violence, and I found comfort watching Father Knows Best, Leave it to Beaver, those shows of the '50s," she says. "So when I got on Sesame Street, I always thought there was some kid out there that might be in a terrible situation or scary situation, looking for comfort in me the way I did. So, I always thought the best thing to do for these kids is to be as honest as possible and not sugarcoat.”

One of the tenets of Sesame Street that the book also highlights is that sometimes there is more than one answer to a problem or question, and more than one way to do something.

“I loved that Sesame Street wanted to face things head on, and that’s why I wanted to put in this book that sometimes when people are scared, we forget that we’re the same," she explains. "That’s kind of a way of alluding to the fact that I’m so stunned that there's still so much rage out in society now, so much anger. I think that it’s because people are scared and we forget that we’re still the same.”

Manzano hopes that parents will use the photographs to talk about what children see depicted and open broader discussions. "Photos give much more of that opportunity to talk about clothes, emotions, the way people are moving, the way it looks like they’re living. It’s very rich, they’ll see these things," she explains. “We’re all the same in the human experience, but we’re different culturally, so isn’t that great?”

In addition to this new photo-forward book, Manzano says she is starting work on a new endeavor in partnership with Fred Rogers Productions. While she can't share many details just yet, it is a “very personal animated series about a little girl.” I'm "very excited about it," she says.

It will be exciting to see how Manzano engages with kids in this new way. For now, just reading A World Together over and over again will have to do.