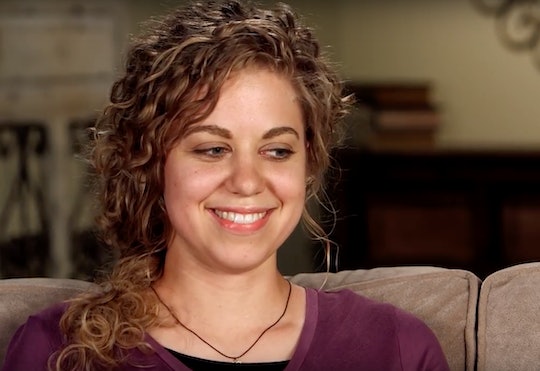 Duggar romances are whirlwind experiences, and no one knows that better than the Duggar kids and their significant others, themselves. Touching on just that, in an exclusive clip for an upcoming episode of TLC's Counting On, Abbie Burnett opens up about leaving nursing and moving to another state ahead of her marriage to John-David Duggar, admitting that it wasn't an easy decision for her to make.

In the exclusive clip shared with Romper, Burnett appears alongside her now-hubby to discuss their upcoming mission trip in the Philippines, and how it came to be. At the time the episode was filmed, Burnett said she's "been a nurse for one year." She shared that nursing wasn't a lifelong dream she fulfilled, but rather something that dawned on her later in the game, after her grandparents became terminally ill. Their ailments allowed Burnett to "interact with nurses at the hospital, hospice, and home health nurses," and, as she explains it in the Counting On clip, that's when she knew she wanted to go into the medical field.

Despite her passion for her chosen career, however, Burnett said in the video she stopped working after she and Duggar got engaged so she could focus more on wedding planning and their upcoming move to Arkansas. "I just love taking care of people. But I left my job a couple months ago so that I could plan for the wedding," Burnett reveals in the Counting On clip, adding, "I do hope to go back to nursing one day, especially so I can keep up my license and my skills."

In the preview for the episode, producers can be heard questioning Burnett about her decision to leave nursing, at least temporarily. When asked if it was "a difficult decision" to walk away, Burnett smiles and says, "Mhm," with a laugh that would suggest she perhaps had reservations about doing so.

Burnett further reveals in the episode preview that the idea for their medical missions trip to the Philippines came about before she and Duggar were even courting, after her parents got together with Jim Bob and Michelle Duggar.

John-David says in the clip, "This mission trip is the thing that really brought us together in the first place," adding that it had always been a dream of his wife's. Burnett shared that "in the course of dinner, somehow medical missions got brought up in the conversation," and John-David claimed he had "a medical mission that she could go on."

With that, the pair started courting and, eventually, wound up engaged and then married.

Check out the exclusive clip of the upcoming episode of Counting On below:

The couple doesn't currently have any children, and have been spending time traveling and indulging in John-David's flying hobby, as seen on their shared Instagram account. According to Us Weekly, they recently traveled to Finland for their honeymoon, sharing a picture of Burnett kissing John-David on the cheek as well as photos of the sights on Instagram.

In the photo caption the couple revealed that they "had so much fun," and were looking forward to "going on new adventures TOGETHER!"

There's no telling what their next adventure will be, but one could speculate that it'll involve more travel, perhaps children, or both. Fans of the newlyweds may get to watch some of the action unfold on TLC's Counting On.